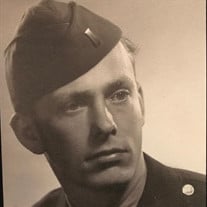 William Proper Carrier of Memphis, Tennessee and formerly of Punta Gorda, Florida passed away on April 13, 2020, at the age of 95. He was born September 27, 1924, in Flint, Michigan to William and Ruth Carrier. During high school at Flint Central, he worked with his grandfather building checkout counters and shelving for the A&P Company of Michigan. He graduated from Flint Central High School where he played in the orchestra and was a member of the baseball team. His family moved to Nashville, Tennessee where he attended Vanderbilt University. In June of 1943, Bill joined the army and served for three and a half years. During his service, he attained the rank of First Lieutenant in the Infantry. He was deployed to the European Theater in March 1944 and joined the 78th Division, 309 Regiment, Company D. After 17 days of combat, he was wounded and sent to Paris to recuperate. A month later, Bill was sent back to his outfit. The 78th Division was sent to Berlin for the Occupation. While in combat, Bill earned the Bronze Star, Purple Heart, Victory Medal, and the American Theater Medal. Upon being discharged in 1946, Bill returned to Vanderbilt to complete his degree in Civil Engineering. Bill married the love of his life, Mary Doug King on December 7, 1946. They were married for 71 years when she died. Bill and Mary moved to Memphis, Tennessee after Bill graduated from Vanderbilt. Bill joined his father in the road construction business, and Bill went on to found Carrier Concrete, which he operated for over 50 years. Upon retirement, Bill and Mary moved to Punta Gorda, Florida. Bill loved boating, playing tennis, and entertaining his family when they came to visit. Bill and Mary went on many cruises and traveled the world. While living in Florida, Bill was an active member of the Elks Club of Punta Gorda and the Charlotte Harbor Yacht Club. He was a long-time member of Second Presbyterian Church where he had served as Deacon and Director of Children's Church. He was a lifetime member of the Engineering Club of Memphis, and he was also a member of the Professional Engineering Society of Tennessee. Bill is survived by his children, John Carrier and his wife Deborah, Carla Carrier Murdock and her husband Ken, Henry Carrier and his wife Mac, Michael Carrier and his wife Evie, and Michelle Carrier Stallard and her husband Tim. He is also survived by six grandsons, David Carrier, Brian Murdock and his wife Ivey, Patrick Murdock and his wife Isabella, Hank Carrier and his wife Meggie, Chris Carrier, and Mike Carrier. He leaves four granddaughters, Ann Carrier, Ashley Stallard, Laura Carrier, and Allison Stallard. Bill is further survived by eight great-grandchildren, Banks Murdock, Sally Murdock, Ridge Murdock, David Murdock, Mollie Carrier, Julia Murdock, William Ford Carrier, and Maria Murdock. Survivors also include, two step-grandchildren and six step-great-grandchildren, Jenny Davis and husband Mike, Noa Eason, and Katie, Leah, Bekah, Michael, Hank, and Joshua Davis, a sister, Margaret Carrier Jackson and two nieces. Given the current national conditions and the family's concern for the health and well-being of others, Mr. Carrier will be interred at Memorial Park Cemetery following a private service for the immediate family.

William Proper Carrier of Memphis, Tennessee and formerly of Punta Gorda, Florida passed away on April 13, 2020, at the age of 95. He was born September 27, 1924, in Flint, Michigan to William and Ruth Carrier. During high school at Flint Central,... View Obituary & Service Information

The family of William Proper Carrier created this Life Tributes page to make it easy to share your memories.

William Proper Carrier of Memphis, Tennessee and formerly of...

Send flowers to the Carrier family.