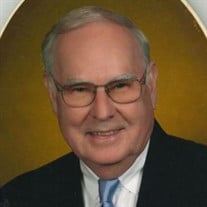 William "Bill" Brantley Ashworth of Memphis, TN, passed away at home on December 7, 2020 at the age of 91. Bill was born in Troy, AL; the second youngest of 8 children. The pine savannas, sandy beaches, and warm night air of "Lower Alabama" (LA) was the perfect spot for a young boy to find adventure and discover Flash Gordon. To prepare him for a military and civilian career, Bill graduated from Marion Military Institute and the University of Alabama where he was a member of the Kappa Alpha Order and the Army Officer Training Corps. He served in the Army from 1954 to 1958. After a tour in Korea, Bill followed in the footsteps of his father and 2 older brothers by attending chiropractic school and received a Doctor of Chiropractic (DC) from Logan University in St. Louis, MO. The decision to attend Logan was fortuitous, as it was where he met his future bride, Genie. Bill's career as a practicing chiropractor was brief. Manipulating and enhancing interior spaces proved more enticing and rewarding than chiropractic adjustments, and a career change to corporate and commercial design followed and merged his love of art, history and architecture. For 26 years, his creativity flourished at Holiday Inns, Inc., where he retired as Director of Design. In retirement, he was active with U.T. Extension Memphis Area Master Gardeners and Haiti Medical Missions of Memphis. Bill was humble about his artistic talents. He enjoyed oil painting and porcelain work, and his pieces will be treasured by the family. Far from a dabbler, he enjoyed repairing and restoring broken objects for friends and creating elegant and timeless spaces- good taste trumps tacky. A master gardener, heirloom roses passed down through generations took center stage in the family garden. Bill followed the lawn and order approach to landscape maintenance. Rotating outdoor play areas and limiting foot traffic was strictly enforced to ensure optimum grass growth. All orphaned and injured animals were welcome at his home. He was generous in sharing his dry wit and fondness for ice cream, sausage balls, and bread with his 2 daughters and 5 grandchildren. Though he did not subscribe to organized religion and remained unaffiliated, Bill's eyes and ears were wide open to the small seeds of spiritual wisdom that found him. If you see him in Heaven, let him know the angels have reserved him a spot at the Jeopardy podium and please pass along a pack of sharpened pencils for the daily crossword puzzle. Bill is predeceased by his parents, Dr. Joseph Rucker Ashworth and Irene Clancy Ashworth, his brothers, Joseph, John, and Oliver Ashworth, his sisters, Willardy Ashworth Vinson and Hilda Ashworth Collett, and his nephew James Vinson. Bill is survived by his loving and devoted wife of 55 years, Virginia "Genie" Stumpf Ashworth, his two daughters, Stephanie Ashworth Stanford (Rick Stanford) and Cameron Ashworth Barclay (Hale Barclay), his 5 grandchildren, Katherine Maret Stanford, Kristian Élysée Stanford, Ashlyn Faye Barclay, William Rucker Barclay, and Brantley Hale Barclay, his siblings, Irene Ashworth Tatom and Don Carter Ashworth, and 12 nieces and nephews. The family would like to offer sincere thanks and gratitude to their friend, Dr. Gordon Kraus. He went beyond what anyone could ever ask and was a lifeline during this difficult time. Dr. Kraus and his staff will forever be in the family's hearts and prayers. Due to the current national heath conditions with COVID 19 and the family's concern for others, there will be a private graveside service at Memorial Park Cemetery, 5668 Poplar Avenue in Memphis. In lieu of flowers, please consider donating to Haiti Medical Missions of Memphis (http://www.haitimedicalmissionsofmemphis.org/). To view the tribute slideshow click the link below: https://www.tributeslides.com/tributes/show/8JD3TQ6Z7ZJ7QFLF

William "Bill" Brantley Ashworth of Memphis, TN, passed away at home on December 7, 2020 at the age of 91. Bill was born in Troy, AL; the second youngest of 8 children. The pine savannas, sandy beaches, and warm night air of "Lower Alabama"... View Obituary & Service Information