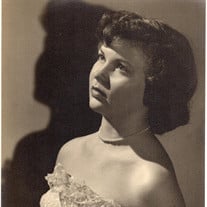 Vannye Louise Goode of Memphis, TN, 87, passed away on August 27, 2021. She was born on February 4, 1934 in Magnolia, Arkansas, to John Joseph Wilson, Sr. and Vannye Emilyne Cox Gilmer Wilson. She is survived by her children, James Calvin McMaster III (Sukie), Susan McMaster Cook (Robert), Barry Douglas Goode (Anita); stepchildren, Michael Goode (April) and Cathy Goode Gary (CW); Grandchildren, Ashley Jamieson (Christopher), Shelley Plunk (Nathan), Trey Flowers (Merillat), Tyler Flowers (Meghan), Scott McMaster, Shannon McMaster, Kristina Goode, Joel Goode (Elise), Michele Montagna (Brent), Bryan Cook, Adam (Catherine), and Amy; Great-Grandchildren, Nolan, Claire, Cannon, McCall, Caroline, Bailey, Sawyer, Will, Graham, Evie Grace, and Emma. She was preceded in death by her first husband, James Calvin McMaster Jr., her husband, James Howard Goode, and her daughter Linda McMaster Flowers (Dallas). Louise grew up in Hot Springs, Arkansas with her parents and stepsister, Lorraine Wilson, and half-brothers Dan Gilmer and Jay Gilmer. She married James Calvin McMaster, Jr. in 1952. They had three children, James, Linda, and Susan. After her husband's death in 1960, she moved back to care for her young children in Memphis, Tennessee. She married James Howard Goode in 1963 after baking him her famous cherry cheese pie. Together they had a son, Barry. From her marriage to Jimmy, she also gained two step-children, Michael and Cathy. Louise also went back to school and proudly received her Bachelor's degree in Education from Memphis State University in the mid-1960s.   Louise’s passion in life was being a homemaker to her large blended family. Throughout her time as a mother, she was known for her baking and her impeccable sewing skills. She even sewed her daughter Linda’s wedding gown, hand sewing on hundreds of individual pearls. Louise always loved old movies and history documentaries. She and Jimmy loved to travel, and in their later years captured hundreds of pictures from their adventures to Hawaii, Russia, Alaska, Europe, and a very meaningful mission trip to Israel. Her greatest joys were being with family and gathering for a holiday or family dinner. Louise loved to make things extra special and thought of every detail. Another love in Louise’s life was her dog Mitzy, and later in her life, Wally. She found an everlasting friendship with these two special companions that brought her so much comfort and joy. Louise believed in the power of prayer and loved the Lord. Louise was a member of Aldersgate United Methodist Church from 1963 to 1971 and then members of Central Church and later Colonial Baptist. She always spoke of being reunited with her lost loved ones someday in Heaven. Louise will be missed by many and her legacy will live on forever through her children, grandchildren, and great-grandchildren. The family will receive relatives and friends on Thursday, September 9th from 5:00-7:00pm, with a funeral service at 2:30pm, Friday September 10th at Memorial Park Funeral Home. The interment will immediately follow at Memorial Park Cemetery. In lieu of flowers, the family requests memorial donations be sent to the Memphis Oral School for the Deaf.

Vannye Louise Goode of Memphis, TN, 87, passed away on August 27, 2021. She was born on February 4, 1934 in Magnolia, Arkansas, to John Joseph Wilson, Sr. and Vannye Emilyne Cox Gilmer Wilson. She is survived by her children, James Calvin... View Obituary & Service Information

Vannye Louise Goode of Memphis, TN, 87, passed away on August...