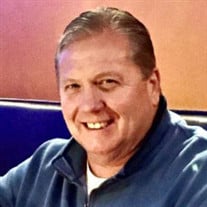 After his battle with cancer, Troy Young. passed away on March 30, 2021, with his brother, Shane, and sister-in-law, Tina by his side. He is finally pain-free and at peace. Troy Young was born on December 1, 1960, in Murfreesboro, TN. to Bob Young and Ruby Thomas Webb. When he moved to Memphis, he attended Goodlett Elementary. He began his high school career at Elliston but finished at Memphis Preparatory High School. Countless hours were spent with the many great friends that were made these years. After high school, he began working at the family business, Seeds, Inc. He was very charismatic and happy which led him to be very sociable. His quick wit made many others laugh. Everyone who knew Troy had a funny story to share. His humor kept people laughing and that is the way he wanted it. Troy created many friendships throughout his athletic career. He loved playing all sports but really enjoyed football. He excelled in football his whole life earning awards from Parkway Village Colts to Memphis Preparatory Panthers. His cars and keeping them clean were very important to Troy; however, those who knew him know his favorite hobby was hunting. Some of his favorite memories that he often shared were hunting with his friends and family. Most importantly, Troy loved his dogs more than anything else. Troy often had a dog beside him traveling the roads. Troy is preceded in death by his father, Bob Young. He is survived by his mother, Ruby Webb; his brother, Shane Young (Tina), and his sister, Pam Allsmiller. He loved his nieces and nephews: Amber Speck (Jeff), Rachel Young Edwards (Jonathan), Robby Young (Megan), Ragan Young, and Ryan Young. Mavis Estes, who has been like a second mom, has been an important part of Troy’s life. Saddest of all Troy leaves Bo and Duke Young, two dogs that have been by his side for the past five years and provided normalcy to his life. Troy wanted everything to be “just right.” To honor Troy, on Friday, April 2, 2021, there will be a visitation at 9:00 AM and service at 10:00 AM. Both will be held at Memorial Park Funeral Home, 5668 Poplar Avenue in Memphis. Flowers may be sent to Memorial Park Funeral Home. In lieu of flowers, please send donations to the Streetdog Foundation at https://www.streetdogfoundation.com/donate

After his battle with cancer, Troy Young. passed away on March 30, 2021, with his brother, Shane, and sister-in-law, Tina by his side. He is finally pain-free and at peace. Troy Young was born on December 1, 1960, in Murfreesboro, TN. to Bob... View Obituary & Service Information

The family of Troy Young created this Life Tributes page to make it easy to share your memories.

After his battle with cancer, Troy Young. passed away on March...

Send flowers to the Young family.