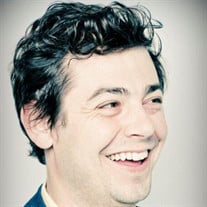 Thomas Anthony Pacello Jr. was born on October 31, 1977, in Memphis, Tennessee. He died on November 16, as a result of complications from pancreatic cancer. Despite the challenges of an aggressive six-month illness, Tommy remained his optimistic... View Obituary & Service Information

The family of Thomas Anthony Pacello Jr. created this Life Tributes page to make it easy to share your memories.

Send flowers to the Pacello family.