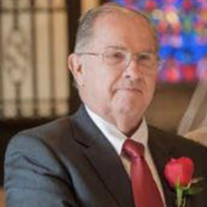 On May 17, 2021, Thomas "Tom" Paul Himes passed away at age 83, following a hard-fought battle with cancer. Originally from Pittsburgh, PA, he previously resided in Baytown, Texas, Birmingham, Alabama and subsequently settled in Memphis, TN. Tom was a dedicated employee of the U.S. Steel Corporation for 41 years, starting in the mailroom as a teenager and eventually retiring as manager of Production Planning. His peers viewed him as a leader and held his talents and contributions to the company in the highest regard. Tom was a beloved husband, father, and grandfather. He loved travel, golf, card games and puzzles, watching the Pittsburgh Steelers, and spending time with his friends and church family. With a true servant's heart, he found joy in volunteering with special needs children and serving anywhere he was needed within the Methodist church. He was often a man of few words; however, what he lacked in words he made up for in thought and his generous spirit. A man of a great heart and character, he will be missed by all that knew him and remembered for his kindness and unconditional love. Tom was preceded in death by his parents, Thomas Eugene Himes and Irene M. Painter, and sister, Mary Jane Himes Specht and daughter, Mary, who died at birth. He is survived by his wife, Donna Holden Himes; son, Lt. Col. Thomas Himes, Ret. (Diana); daughter, Terry Lynn Hecker (Bill); and stepdaughter, Julie Holden Ferguson (Jared). His beloved grandchildren are Emily Lynn Hecker, Matthew Dolfi Hecker, Thomas Joseph Himes, Anne Holden Ferguson, and Amelia Tate Ferguson. He will be honored on May 22, 2021 at St. Luke's United Methodist Church, located at 480 South Highland Street, Memphis, TN 38111 at 11:00 a.m., with visitation beginning at 10:30 a.m.. In lieu of flowers, it is asked that donations be made to St. Luke's United Methodist Church in his honor.

The family of Thomas Paul Himes created this Life Tributes page to make it easy to share your memories.

Send flowers to the Himes family.