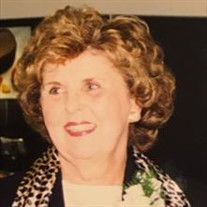 Shirley Ann Kindberg passed away Dec 17th at her residence Brookdale Dogwood Creek in Germantown TN. Shirley was born in Jermyn, PA on March 4, 1935, daughter of Margaret and Al Rosenstein. Shirley is preceded in death by her parents Al and Margaret Rosenstein, sisters Louise Corrigan Ferrucci, Janet Clemmer, Jean Gobeo, her niece Maureen Sassi and grandson Ryan Walker. Shirley is survived by her beloved brother Monti Rosenstein and her four children, Kevin Kindberg, wife Linda Alcroft of Cranbury, NJ, Robert Kindberg of Raleigh, NC, Sharon Walker, husband Dave Walker of Germantown, TN and Deborah Vitullo, husband Bill Vitullo of Arlington, TN. She also leaves 9 grandchildren, Morgan, Abigail and Madison Kindberg, Michelle, Shawn, and Alex Walker and Joseph and Dominic Vitullo and 2 great grandchildren, Carter Walker and Finlay McIlroy. Shirley was a loving building block in all of their young lives and will be deeply missed. Shirley grew up in Middletown, NY where she graduated from Middletown High School. She married and raised a family of four, who she dearly loved. After moving to Germantown, TN in 1974, she returned to college to earn her Masters of Education degree. Shirley loved her role as an educator. Shirley taught in the Shelby County school system until her retirement in 2000. During her retirement she focused on time with her family, family dinners, gardening and traveling when she was able. She also became an avid Memphis Grizzlies fan and hated when her favorite player, Marc Gasol, was traded. During this challenging year, 2020, Shirley kept her spirits high and enjoyed friends and her routine at Brookdale. She spoke with family daily, kept up with the news, keeping her mind sharp and wit intact. Shirley is already missed by us all, a spitfire and a constant in our lives. Shirley and the fun memories we all made together will stay in our hearts and minds forever. We love you Mom, Grandma, Great Grandma, Mother-in-law and Friend. Due to the current Covid situation, the family will celebrate Shirley’s life with a memorial at a later time . The family asks that gifts in memorial be given to the Diabetes Association or the Cancer charity of your choice.

Shirley Ann Kindberg passed away Dec 17th at her residence Brookdale Dogwood Creek in Germantown TN. Shirley was born in Jermyn, PA on March 4, 1935, daughter of Margaret and Al Rosenstein. Shirley is preceded in death by her parents Al and... View Obituary & Service Information

The family of Shirley Ann Kindberg created this Life Tributes page to make it easy to share your memories.

Send flowers to the Kindberg family.