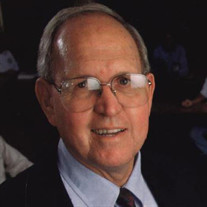 Dr. Russell “Deek” Hensley, (Ret. Col. USAF), 89, of Germantown TN, passed away on July 18, 2020. Preceded in death by his daughter Mary Bright Adams and his sister Ray Dean Campbell. He is survived by Lillie Bright Johnston, his devoted wife and partner of nearly 64 years, and two children; Russell Johnston Hensley, (Missy) Laura Beth Matson (Arnie). Other survivors include his seven grand grandchildren, Coers Adams (Sarah), John Hensley (Camille), Mary Tipton Adams, Hunt Hensley (Pauline), Anna Lewis Jackson (Kevin), Rives Matson, Bennett Matson, a brother, Gary Hensley (Beverly), and three great grandsons. Deek, as he was known by his friends, was born in Salt Lake City, Utah on November 12, 1930. He graduated from the US Naval Academy with a Bachelor of Science in Engineering in 1955. He then received a Master of Science in Nuclear Engineering from the University of Oklahoma in 1962, a PHD in Engineering from Stanford University in 1966, a Master of Science in Public Administration from George Washington University in 1972, and a Doctor of Business Administration from George Washington University in 1975. During his time at the Naval Academy, he was the captain of the winningest rowing team in history. In 1956, he was first alternate on the gold-medal Olympic team. His career spanned the emergence of the rocket area where he worked with Wernher Von Braun in developing the nuclear rocket engine to the age of global telecommunications and geopolitics. He also worked as a part of the Nixon administration dealing with the Arab oil embargo which eventually led to the creation of the Department of Energy. He eventually left the military and was president of Aetna Diversified Technologies which helped Aetna Life and Casualty diversify into high-tech fields such as satellite communications, fiber optic networks and high-speed local telecommunication systems. Lastly, he moved to Christian Brothers University (CBU) to serve as the Executive Director of Telecommunications. At CBU, he worked on a project funded by the US State Department and the International Communications Association to develop telecommunication research centers at CBU and European universities to build library networks and promote market economies in eastern Europe. Due to COVID-19 a private family graveside service will be held at Memorial Park Funeral Home and Cemetery.

The family of Dr. Russell "Deek" Hensley created this Life Tributes page to make it easy to share your memories.

Send flowers to the Hensley family.