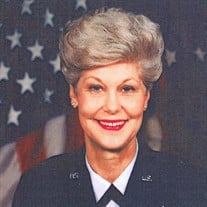 Roberta Vilven Mills was born on March 18, 1938, in Alma, Kansas to Charles and Regina Vilven. She died in her sleep at home on April 20, 2021. She is predeceased by her only brother, Charles Edward, and her husband, Dr. Dan C. Mills. She is survived by her stepson Dr. Dan Mills and stepdaughter Danyce Mills, both in California. Roberta’s professional life was unique in that it spanned two careers, separate, yet very much intertwined. In one she was known as Major General Roberta V. Mills. In the other, she was Roberta Mills, RN, MSN. She served with distinction and left a lasting legacy in both careers. In her military career Roberta forged a path of unprecedented achievement for women, serving in the Reserve Components of the United States Air Force, and rising in rank and responsibility to levels never before attained in the National Guard by women officers. Roberta began her military career when she was commissioned a second lieutenant in the USAF Reserve in January 1962. She was honorably discharged in 1995. During her thirty-three career, Roberta became the: • First nurse to be appointed to the position of Air National Guard Assistant for Nursing, United States Air Force, Military Airlift Command in 1991. • First nurse appointed to the position of Air National Guard Assistant to the Chief, United States Air Force, Nurse Corps, 1991-1993. • First woman to be promoted to rank of Brigadier General in the history of the US National Guard, 1992. • First woman to be promoted to the rank of Major General in the history of the National Guard of the United States, 1994. Her military awards and decorations include the Air Force Distinguished Service Medal, the Legion of Merit, the Meritorious Service Medal, The Air Force Commendation Medal, the Air Force Outstanding Unit Award, and the National Defense Medal. Roberta’s Nursing Career began when she received her Bachelor of Science in Nursing Degree at Sacred Heart Dominican College in 1960, followed by a Master of Science in Nursing from St. Louis University, St. Louis, Missouri in 1963. She first came to Memphis in 1965 to assume the position of Assistant Director of Nursing at Methodist Hospital and was promoted to Associate Director of Nursing during her twelve-year tenure there. In 1977, Roberta became the Associate Director of Nursing Service for the University of Tennessee - City of Memphis Hospitals, during which time she was also appointed Adjunct Assistant Professor for the UT College of Nursing. In 1980, she began working as Associate Director of Nursing at Baptist Memorial Hospital and was promoted to Director of Nursing Administrative Services before concluding her eleven-year tenure there. She spent the last seven years of her nursing career as President and CEO of the Visiting Nurse Association. Throughout her Nursing career Roberta was highly regarded as a role model and mentor to nurses at every level, including Advanced Practice. She was inducted into the Sigma Theta Tau National Honor Society for Nursing in 1977 and received the Outstanding Nurse of the Year, Air National Guard in 1985. She was affiliated with numerous Nursing organizations and held various positions of leadership in many of them. Roberta was a devoted member of St. Louis Catholic Church for 14 years. She was active in the Rosary Makers Guild and Ministry to the Sick, and regularly attended the Ladies Bible Study. Roberta’s dog loving friends know she loved Chihuahuas and adopted many through the animal rescue program over the years. Her four-year old, Chloe, was with her when she died. Chloe was taken to McGehee Clinic for Animals where she received loving care while the Clinic arranged a “Forever Home” adoption the next day. Much has been said about Roberta’s professional life, but to many she was also known as friend. She was a loyal and faithful friend, the kind of friend who sticks with you through all the ups and downs of life. Regardless of how you knew her, you respected her for who she was. Her integrity and trustworthiness were above reproach. Her quick wit and sense of humor offset the seriousness often required by her responsibilities. Roberta was a private person who never boasted about her achievements or made anyone feel inferior, regardless of her rank or position. Always elegant in appearance and dignified in bearing, Roberta made a lasting impression on anyone who met her. Mrs. Mills visitation will be held from 4:00 p.m., to 6:00 p.m., Sunday, May 2, 2021 at Memorial Park Funeral Home and Cemetery. Her funeral mass will be held at 10:00 a.m., Monday, May 3, 2021 at St. Louis Catholic Church. Entombment will be in the Memorial Park Mausoleum.

Roberta Vilven Mills was born on March 18, 1938, in Alma, Kansas to Charles and Regina Vilven. She died in her sleep at home on April 20, 2021. She is predeceased by her only brother, Charles Edward, and her husband, Dr. Dan C. Mills. She... View Obituary & Service Information

The family of Roberta Vilven Mills created this Life Tributes page to make it easy to share your memories.

Send flowers to the Mills family.