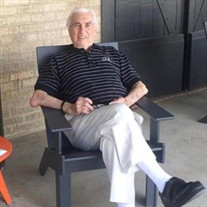 Robert Mitchell White, husband, father, father in law, grandfather extraordinaire, passed away Thursday, July 30, 2020 in Memphis, TN after being hospitalized following a fall. In his last years, Bob struggled with progressive dementia but worked to maintain his positive outlook, kind demeanor and great sense of humor. He was born on September 2, 1927 in Halls, TN, to father Eugene Mitchell White and mother Beulah Mae Jeffries White. He had a sister, Mary Margaret Portwood, six years his senior. Bob and his family moved to Memphis when he was a boy and they lived in a few different houses in south Memphis near Rozelle and the train tracks. In 1944, at the age of 17 he joined the Navy and spent about a year in Okinawa towards the conclusion of World War II . Upon returning to Memphis, he graduated from Tech High School and attended Memphis State for a couple of years. He worked in the Gulf oil and gas business in Dyersburg and Memphis and then real estate where he was an agent and a property manager. He retired In 1996 from managing the Embassy Apartment building across from White Station High School in Memphis. He also worked as a starter at Galloway Golf Course and lived out his last 20 years at Central and Highland. He was a proud Memphian through and through and celebrated his beloved city through good times and bad. Bob met his sweetheart, Grace Margaret Sabatier, on a blind date on January 5, 1949 and the two were married exactly one year later on January 5, 1950. They celebrated their 70th anniversary earlier this year. He was preceded in death by his parents, his sister and his oldest son, Robert Mitchell White, Jr, (Mitch). He is survived by his wife, Grace, their children, Rene Eugene White (Carmen Victor), Barry Jeffries White, and Larry Jeffries White (Loretta Church White) and Daughter-in-Law Jody. Bob's 8 grandchildren include Teddy, Albert, Rex, Beatrix, Margaret, Caris, Rene and Olivia. Bob was a romantic, a philosopher at heart and possessed a real lust for life. He had the ability to find humor in any situation. He would often spend hours sharing stories (mostly funny), playing practical jokes, sharing books, and sharing his love for music and dance. He also loved people and taught his sons the meaning of acceptance and tolerance. He was quick to say he was sorry if he offended someone and he was a kind, gentle and grateful man till the end. In the past years, Bob and Grace became friends with and received wonderful care from Care Manager Juanita McDonald along with Eugenia Hammond and Virginia Dean. Glenn McDonald became a great friend and chess partner. Our family will be forever grateful for their support and friendship. During this time of social distancing, Bob's life will initially be celebrated with his family and friends over Zoom on September 12, 2020. We look forward to reuniting in person at some point and for our final reunion in Heaven.

The family of Robert Mitchell White created this Life Tributes page to make it easy to share your memories.

Send flowers to the White family.