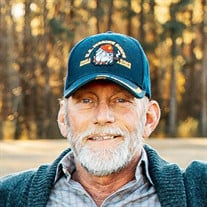 Robert Earl “Shultz” Harrison, Jr. was born on January 14, 1960 in Memphis, TN to Nell Crawford and Robert Harrison. He drifted through the Horn Lake public school system and graduated in 1978, to his mother’s great relief. After a series of run-ins with the law, he decided to cut his teeth on red crayons at Parris Island where he turned wrenches and busted knuckles on C-47s, F-4 Phantoms, and A-10 Warthogs, and developed his passion for aviation. After years of fighting his CO’s on keeping his beard, he moved to the private sector and become a civilian contractor. He moved to Saudi Arabia where worked on Sky Pigs for the Royal Saudi Air Force. His life took a positive turn when he found the love of his life…. scuba diving. Another noteworthy event was when he met his wife, Lois Harrison, on a flight from Saudi Arabia to New York and they joined the mile high club. They fell in love, were married in less than three months, and moved back to Memphis where a new chapter of life began. He chased airplanes around the country, dragging Lois and their two chirrens, Rhiannon and Ryan, along for the ride. His gallivanting lifestyle led them to move twelve times across five different states before settling in Horn Lake, MS in 1991. Here, he completed his family with a happy accident named Rory, and finally found his work family at Wilson Air Center in 2000. He piddled and toiled within those grounds for 22 years until a few days before his untimely demise. Although he’s no longer on the payroll, his spirit will forever linger at Wilson, watching over everyone’s shoulder as they do everything wrong. At certain times, when the air is right, you can still hear a faint curse when someone runs the hangar door off track or forgets to plug in the Lektro. Although he finished his active service many years ago, he continued the Marine Corps lifestyle until he took his last breath surrounded by his family. He drifted off this mortal coil on February 26, 2022 at 4:48pm in DeSoto County, MS. True to his form, he left without much notice, like so many of his unplanned endeavors and adventures. His wife of 38 years did not appreciate him taking her halfway across the world, and then leaving in such a hurry. His children, although heartbroken that he isn’t here to point out they look like Joe Shit the Ragman, cannot help but laugh at his final salute to the world. He is survived by his wife, soul mate, and debate partner, Lois Harrison, his baby girl, Rhiannon Daugs, her husband and third son, Joshua Daugs, and his granddaughter, Lillybit Daugs; and his two ride or die aces, Ryan and Rory Harrison. He also leaves behind his loving mother, Nell Crawford (Jim Crawford); his sisters, Lucretia Woods (Gary Woods), Cathy Turner, and Brenda Henry (Bill Henry); and countless aunts, uncles, nieces, nephews, cousins, parole officers, and friends that will help his memory live on. There will be an alternate viewing on Saturday, March 5, 2022 at 9am at Memorial Park Funeral Home in Memphis, TN since his wife refused to honor his request to have him a.) face down in the coffin so everyone can kiss his ass or b. ) standing in the corner with a glass of Crown Royal in his hand to appear natural. The funeral service will follow at 10am at Memorial Park Funeral Home. The burial will take place in the middle of nowhere and you aren’t invited unless you already know where it is. This is due to the fact that only his children can throw dirt in his face and get away with it. Everyone who knew him is asked to celebrate Shultz’s life in their own way… raising a glass of their favorite drink in his memory would be quite appropriate. Instead of flowers, he would hope that you would do an unexpected and unsolicited act of kindness for some poor wretch in his name. Mason Jars full of money or moonshine will be accepted at Sacred Heart Southern Missions in Walls, MS as well. He always said he didn’t need nobody for nothing, if he couldn’t get it on his own. We hope he knew how much we needed him, and hope he’s bending keys, saying “mannneee,” and jamming out to Lucero somewhere out there. Oorah, old man! We will see you when the ride stops and it’s our turn to get off. Memorial Park Funeral Home, 5668 Poplar Ave, Memphis, TN, (901) 767-8930.

Robert Earl &#8220;Shultz&#8221; Harrison, Jr. was born on January 14, 1960 in Memphis, TN to Nell Crawford and Robert Harrison. He drifted through the Horn Lake public school system and graduated in 1978, to his mother&#8217;s great relief.... View Obituary & Service Information

The family of Robert Earl "Shultz" Harrison created this Life Tributes page to make it easy to share your memories.