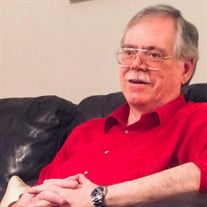 Richard Joseph Brehm, 73, died Friday, Jan. 17, 2020, in Memphis, Tennessee, following a lengthy illness. Richard was born in St. Helens, England on July 10, 1946, but grew up in Rahway, New Jersey. After attending Cornell University for a short time, he served in the U.S. Army for two years before receiving his Bachelor’s and Master’s degrees in English from University of Memphis. A perpetual student, Richard taught himself computer science, and when he saw an ad in the paper for a job in that field at Baptist Memorial Hospital, he answered it. Thirty-seven years later, he retired with the title of Human Resource Manager. On November 4, 1991, he married his best friend of 20 years, Carol, and they raised a daughter, Carrie. Richard had a passion for duplicate bridge, becoming a Life Master in just three years. He loved to travel with his beloved Carol to tournaments, particularly when they emerged victorious. He was also an avid collector of music, amassing a collection of well over a thousand compact discs and vinyl albums covering all genres, from the Beatles to Bach. His quiet, unassuming character belied his quick, dry wit, and though he used few words, he loved with all his heart. This gentle giant (6’7”), who thought Velveeta was a food group, was happiest being Will and Ryan’s “Pop,” playing hours of games with his grandson, and enjoying family time with the whole Nicholson and Wilson family. Richard was preceded in death by his father, Joseph Brehm; his mother, Barbara King Brehm; and his sisters Joanne Santora and Kathleen Sweeney. He is survived by his wife of 28 years, Carol Wilson Brehm; his daughter and son-in-law Carrie Elizabeth and Trey Nicholson, his grandsons Ryan and Will Nicholson; his sister Barbara (Joe) Paprocki; his brothers William (Karen) Brehm and Michael (Joanne) Brehm; and several nieces, nephews and cousins. Visitation will be held on Saturday, January 25, 2020, at Memorial Park Funeral Home (5668 Poplar Avenue) from 10:00 a.m. to 12:00 p.m.

The family of Richard J. Brehm created this Life Tributes page to make it easy to share your memories.

Send flowers to the Brehm family.