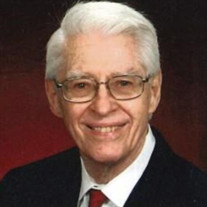 Mr. Ralph W. Pope, Senior, 94, passed away Wednesday, January 20, 2022, in Memphis, Tennessee. Mr. Pope was a member of Christ United Methodist Church and the Lamp-lighter Sunday School Class. He held the position of General Sales Manager at Chuck Hutton Chevrolet in Memphis, Tennessee for 30 years. Mr. Pope attended Memphis State University where he had the honor of being the #2 initiate into the Lambda Chi Alpha fraternity at Memphis State University, along with 12 other men known as the Fearless 13. He then attended the University of Alabama in Tuscaloosa in 1950. Mr. Pope was 2nd Lieutenant in the United States Airforce and served during the Korean War. Mr. Pope is preceded in death by his first wife, Anna Merle Pope and his daughter, Elizabeth Ann Pope Taylor. He leaves behind his second wife, Dale Lusk Pope, his son and daughter-in-law, Dr. and Mrs. Ralph W. Pope, Jr. (Barbara), his daughter and son-in-law, Mr. and Mrs. Chuck Guin (Vicki), his son-in-law and wife, Mr. and Mrs. Alan Taylor (Cheryl), his step-son and daughter-in-law, Mr. and Mrs. Tommy Lusk (Sloan), his step-daughter, Ms. Dawn Eberle-Hanback and grandchildren, Will Taylor, Meredith Taylor, Drew Guin, Eric Guin, Emery Lusk, Thomas Lusk, David Eberle and Mason Han-back. Mr. Pope was treasured and loved by all who knew him or knew of him. Visitation for Mr. Pope will be on Wednesday, January 26, 2022, at the Memorial Park Funeral Home (5668 Poplar Avenue; Memphis, Tennessee) at 10:00 am, with services at 11:00 am. Interment will follow at the same location. The family requests that in lieu of flowers, please send any memorials to Christ United Methodist Church; 4488 Poplar Avenue; Memphis, Tennessee 38117.

The family of Ralph W. Pope created this Life Tributes page to make it easy to share your memories.

Send flowers to the Pope family.