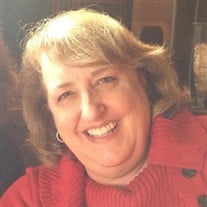 Patricia A. Smith (Pat), passed away peacefully on March 16, 2021 in Memphis, TN. Pat was born October 25, 1950 to the late Jerome and Edith Brun of Dayton, OH. After graduating from University of Dayton in August 1971, Pat went on to marry Douglas K. Smith in September 1971. They had two daughters, Kristin and Colleen, and moved from Dayton to settle in Germantown, TN in 1985. Pat spent her life caring for others. Through her profession as a psychologist and geriatric care counselor, she served so many by helping them achieve a better life through mental health. She, along with a partner, founded Senior Resource Consultants and she was also heavily involved with multiple organizations including Professional Network on Aging and Creative Aging Memphis. Pat most recently gave her time and talents to Germantown United Methodist Church as the Elder Care Coordinator. In her free time, Pat enjoyed being with her friends - the Bunko Babes, P.E.O, and so many more. She was a member of three different book clubs, loved going for walks, was always decorating for whatever holiday came next, and enjoyed sitting on the patio each evening with her husband. She also found her calling as a grandmother two years ago when Oliver, her grandson, was born. She was the best Gaga to him and adored every minute they spent together. Pat is survived by her husband, Douglas K. Smith (Doug); her daughter Kristin Golden and son-in-law Eddie; her daughter Colleen Radish and son-in-law Ryan; and her grandson Oliver Radish. She is also survived by siblings Sharon (Tim) Carter, Peg (Chuck) Trego, Sandy (Roger) Dietsch, Jay (Theresa) Brun, and many nieces and nephews. Later this spring, the family will hold a private graveside service followed by a reception that is open to all friends and family to celebrate Pat’s beautiful life. In lieu of flowers, please send donations to St. Jude Children’s Research Hospital (Memphis, TN).

Patricia A. Smith (Pat), passed away peacefully on March 16, 2021 in Memphis, TN. Pat was born October 25, 1950 to the late Jerome and Edith Brun of Dayton, OH. After graduating from University of Dayton in August 1971, Pat went on to marry... View Obituary & Service Information