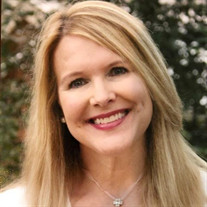 Pamela Williams Sousoulas passed away peacefully in her sleep Saturday, August 15th after a long battle with vascular dementia. She was 60 years old. Pam was born in Memphis, TN on November 29th, 1959 to Alpha Louise Williams and the late James Lewis Williams. She graduated from the University of Mississippi in 1981 with a bachelor’s degree in Social Work. Pam was a proud member of the Delta Delta Delta sorority and little sister of the Sigma Alpha Epsilon fraternity. After graduating college, Pam moved to Dallas, TX to work in the family furniture business at the Dallas Market Center. Shortly thereafter, she became a flight attendant with Air Atlanta. Pam took on the international routes, traveling all over the world and eventually, moving to Holland. Ultimately, she longed to be home, so she returned to Memphis and became a very successful mortgage loan originator. Soon, the itch to see the world returned, and she became a pharmaceutical sales representative. After a successful tenure, she resigned to spend more time at home with her two young sons. Later in life, she followed her passion of helping people by becoming a real estate agent with Crye-Leike in Memphis. Throughout her life, Pam remained a committed servant to the community. During her early years in Memphis, she taught Sunday school every weekend at Independent Presbyterian Church. She was also an active participant at Streets Ministries, where she mentored teenage girls. Pam was also a substitute teacher at Presbyterian Day School for two decades. She was a passionate member of the Wood Grove Garden Club, where served as the 2007- 2008 President. Every summer, she taught Vacation Bible School at Second Presbyterian Church. She volunteered as a leader for teenage girls at Chrysalis through Christ Church Memphis. More recently, Pam and her husband, George, were Shepherd Leaders in the Sojourner’s Class at 2PC. She also was part of the 2PC Ministry to Women at the Memphis Penal Farm. Pam was a member of the Mystic Society of the Memphi, where she and her husband George were presented as Memphi Duke and Duchess of the Court 2015. She was involved in Carnival Memphis for many years. A long-time member of the Junior League of Memphis, she loved getting new residents of Memphis involved in the civic and social scenes. She was awarded the Volunteer of the Year Award for her work with new members in the early 1990’s as a Sustainer. Pam had the rare ability to spread unwavering kindness and joy to all she knew. A loving mother, wife, friend and devoted servant to God and her community, she believed in the true good within all people. Pam never knew a stranger—her unforgettable smile would light up every conversation and every room she entered. Her truly selfless heart wasn’t just reserved for her family, but for everyone she knew. Pam was predeceased by her father, Jim. She is survived by her beloved husband George, 60, her mother, Louise, and her sister, Patsy Edrington. She leaves behind her two children, Norfleet and Wills (sons of Frank Norfleet Abston Sr.), as well her three step - sons, Michael Sousoulas (Megan), Evan Sousoulas, and John Sousoulas. There will be a visitation at 5 P.M. to 7:00 on Monday, August 17th at Memorial Park Funeral Home and Cemetery followed by a service at Second Presbyterian Church at 11:30 on Tuesday, August 18th. Please visit www.memorialparkonline.com to leave online condolences for the Sousoulas family.

Pamela Williams Sousoulas passed away peacefully in her sleep Saturday, August 15th after a long battle with vascular dementia. She was 60 years old. Pam was born in Memphis, TN on November 29th, 1959 to Alpha Louise Williams and the late James... View Obituary & Service Information

The family of Pamela Sousoulas created this Life Tributes page to make it easy to share your memories.

Pamela Williams Sousoulas passed away peacefully in her sleep...

Send flowers to the Sousoulas family.