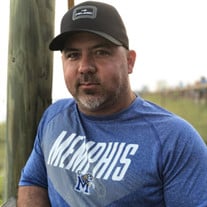 Michael "Mike" Claudio, 47, of Bartlett, Tennessee, passed away on Saturday, August 28, 2021. He was preceded in death by his father, William H. Claudio. Mike is survived by his wife of 27 years, Christie Claudio, four children, Chaise Claudio (Tyra Libby), Colbie Claudio (Megan Howard), Garrett Claudio and Bailey Tapp, two grandchildren, Jaxon Claudio and Parker Claudio, two siblings, John English (Lauren) and Bill Claudio (Melissa), his mother, Patricia Fuller (Sammy), his parents-in-law, Daniel Sullivan (Jeanne) and a sister-in-law, Shirley Jamison (Lillie). Mike was known for many things. Among them was how he taught his family valuable life lessons such as how to be an amazing husband, father, son, worker and friend. He protected his family all while being the best husband, son, son-in-law, father, grandfather, friend and even boss. He was funny, outgoing and a friend to everyone he met. His family knew him to be strong even in the rough and painful times of life. He worked for White Door Events where he was the head of the production workshop. He was hands on, meticulous, very creative, loyal, efficient and a master craftsman. Not only will his family miss him but so too will his work family. At a young age Mike started playing baseball, wrestling and everything in between even bull riding. Later on in life he played playing softball and cornhole. After having kids, he turned his focus on their sports events. He would never miss a game as it was so important to him to be there. He was well known in the sports community. His family always came first. The family will receive relatives and friends on Thursday, September 2 from 12:30 pm until the time of the funeral service at 2:30 pm at Memorial Park Funeral Home and Cemetery, 5668 Poplar Avenue in Memphis. The committal service will immediately follow. Click the link below to view the webcasted service: http://webcast.funeralvue.com/events/viewer/59558/hash:B56DE3D5DCF246A7

Michael "Mike" Claudio, 47, of Bartlett, Tennessee, passed away on Saturday, August 28, 2021. He was preceded in death by his father, William H. Claudio. Mike is survived by his wife of 27 years, Christie Claudio, four children, Chaise Claudio... View Obituary & Service Information