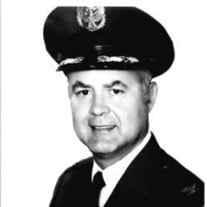 Marvin S (Marv) Donnaud June 21, 1931 – December 23, 2020 Our beloved Daddy, who loved flying his little plane in the big sky more than practically life itself, has flown to his forever home of blue skies and tail winds. Marv loved all things aeronautical and embraced flying from his earliest days of making paper airplanes in grade school, to flying the lower 48 states and multiple trips to the easterly provinces of Canada. Marv was a proud veteran of the US Marine Corp, VMF Ragin’ Cajuns 143, and was Tennessee Wing Commander of the Civil Air Patrol. He was happiest above the clouds. Marv was an honorary member of the Flying Physicians Association, as well as a member of the UFO’s, United Flying Octogenarians Association. He was as equally accomplished in the Insurance Industry as he was the specialization of Aviation Insurance, beginning his career in insurance in 1952 at Liberty Mutual until his recent retirement. A native New Orleanian, Marv loved a good party, a king cake, oysters, a Sazerac, and his children and grandchildren, who were his greatest supporters. He will forever be held close in the hearts of his children and their loves: Janis Donnaud and Peter Gethers of NYC, his daughter and business partner of 35 years Marsha Donnaud Silverstein and Pete Dunn, of Memphis, TN. and Clarksdale, MS., Nancy Donnaud Butcher and Tom Butcher, Collierville, TN., David Donnaud of Memphis, TN., Gary and Debbie Donnaud of Oakland, TN., and Bryan Donnaud of Germantown, TN., and his granddaughters, Carly Crawford and Fiancee Nikki Veit of Memphis, TN., and April Donnaud of Germantown, TN. Marv also leaves his two younger sisters, Carol Donnaud Moyer of Bedford, NH., and Maureen Donnaud Manget of St. Louis, MO., along with a host of loving nieces and nephews. Our world will not be the same without him, for we laughed with him and at him, all of our lives! Bless him! He was smart, funny, and forever young. He recently said that he had 6 goats. “Goats!” I said knowing our Dad had never been a herder, or known anything about goats! “I have 6 children who are the greatest of all time!” he replied. The family extends our deepest gratitude and special thanks to his most ardent caregivers: Lovie Mitchell, Ann Loria Henderson, Shel Bradford, Stephanie Booker, Elaine Alston, Barbara Gavalas and Katherine Anthony, who adored him as their own. Their tireless efforts and genuine love for him mean the absolute world to us. And now, one final time: Laissez les bon temps rouler! “Oh, I have slipped the surly bonds of earth, and danced the skies on laughter-silvered wings.” Due to the pandemic we are going through, and the families concern for everyone’s safety, we have decided to have a Celebration of his Life at a later date. In lieu of flowers all memorials can be made to Crossroads Hospice, (crhcf.org) or St. Jude Children’s Research Hospital, (http://www.strudel/org)

Marvin S (Marv) Donnaud June 21, 1931 &#8211; December 23, 2020 Our beloved Daddy, who loved flying his little plane in the big sky more than practically life itself, has flown to his forever home of blue skies and tail winds. Marv loved all... View Obituary & Service Information

The family of Marvin S Donnaud created this Life Tributes page to make it easy to share your memories.

Send flowers to the Donnaud family.