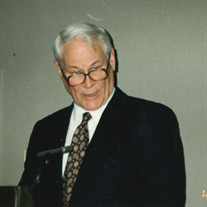 Dr. Major L Wilson, Professor Emeritus of History at the University of Memphis, died on December 27, 2020. He is survived by Donna, his dear and loving wife of 64 years, son John Morgan, sister Margie Williams and fourteen nieces and nephews. Sadly, his oldest son Shannon Arthur had died many years earlier, on Christmas Eve 1992. The son of Arthur and Lillian Wilson, Major was born on August 26, 1926 and grew up on a small farm in the Cypress Valley community of Faulkner County, Arkansas. He graduated from Vilonia High School in 1943, enlisted in the U.S. Navy and served for a year and half in the Pacific Theater of World War II. Enabled by the GI Bill, he attended Vanderbilt University, graduated Magna Cum Laude in 1950 and was inducted into Phi Beta Kappa. Aspiring to an academic career, he earned an MA at the University of Arkansas, taught high school for two years and then six years more at the highly rated Junior college in Kansas City before receiving his PHD in history at the University of Kansas in 1964. He then joined the history faculty at Memphis State University and launched a very productive career spanning more than three decades. Two distinguished teaching awards bespoke the appeal of the classroom and the mission of imparting to the undergraduate students the love of history and a critical appreciation of the nation's past. Meanwhile he served as Graduate advisor, mentored three candidates in the PHD program and worked closely with other students seeking the advanced degree. During this process he developed a highly acclaimed course, the Philosophy of History, that sought to define the study of mankind's venture through time as a distinctive and indispensable discipline with the college curriculum. An impressive body of scholarly publications served to enrich his teaching through the years and bring national recognition to himself and the University. Papers read at professional meetings, two favorably reviewed books, chapters in six anthologies, thirty articles in scholarly journals and a great number of book reviews, all of these mad a substantial contribution to the ongoing dialogue among historians of Jacksonian Democracy and the coming Civil War. Professor Wilson was also a good citizen within the academic community. Among many other duties outside the community, he serviced on a great number if important committees, including those dealing with faculty tenure and promotion, curriculum review and the search on tow occasions for the Dean of Arts and Sciences. His passion for sharing ideas with others extended beyond the classroom through numerous presentations to church and civic groups and to the adult education classes at Calvary Episcopal Church. Many letters to the editor reached a larger audience and at times sparked debate on current issues. In the meantime, golf and gardening, lawn care and little league sports, fellowship with friends and family vacations, lay ministries at Calvary and Cardinal baseball, dialoging with his dear spouse Donna and daring to dabble in the kitchen, these and many other things outside academia made welcome claims upon his time and enriched his life. Reflecting later upon his academic career, he came to see more clearly what a privilege and an honor it had been to touch the lives of many hundreds of young men and women through the years and to have been touched by them. Most of all, he came to appreciate the extent to which he had been inspired and enabled by his wife, Donna, a loving and faithful spouse to the end. And happily, well before retirement, he welcomed the opportunity to support he belated but highly successful career as a school librarian. In retirement he found time to work on a long reading list, fellowship with former colleagues and became more engaged in the extended family relationships. To the end he felt that he had fought the good fight, finished the course and kept the faith.