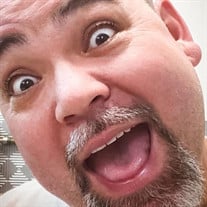 Lester Giordano, described by most who knew him as “larger than life”, passed away on Friday, April 3, 2020, at the age of 49. Lester had a magnetic personality that left a lasting impression on everyone he met. He was truly an unforgettable person. Lester had a passion for everything he did and lived life to its fullest. Though he worked hard, he played harder. Lester loved LSU football, lazy days on Pickwick lake, crawfish, hosting get togethers on his patio, having a drink with friends, loud dance parties with his girls in the living room, and generally just having a good time. He was loud and boisterous while also kind and generous. Anyone who spent time with Lester will likely have a story to tell about him - not all of which would be G-rated. Even so, faith was just as important to Lester. A member of St. Francis of Assisi Catholic Church, Lester ensured his children developed a relationship with God. Known by much of his family as “Little Les”, Lester did everything big. He had the opportunity to have several once-in-a-lifetime adventures, like playing golf at Pebble Beach, attending both a national championship and super bowl with his favorite teams, and hunting and fishing in several corners of the world. In the last two years, Lester and his girls could be seen traveling the States in their RV. Football games, beaches, and theme parks were frequent destinations for this family time. These trips were always memorable, including one that ended with a horse kicking him. Though he described himself as a “simple tool salesman”, Lester founded and led three successful businesses dedicated to supporting the medical manufacturing industry. His master plan was to build a company that could be passed down to his children. Within 6 short years, he was well on his way to accomplishing that goal. Balancing success in both business and family was important to Lester. In addition to his love for life, Lester had a love of people. He had a longstanding goal of meeting at least one new person each day. He became personal friends with many of his customers, and made everyone around him feel special. Lester is survived by his wife of almost 17 years, Janet; his daughters Avery (9) and Brooke (7); mother Nancy; sister Laura Aucoin and her husband, Everrett; sister Tiffani Morales; niece Annalise Morales; nephew Abby Morales; in-laws Dianne & Travis Wright and Jimmy Sturdivant; loyal hunting dog, Millie; and numerous friends who were considered family. His father, Lester Giordano, Sr., met him at the gates of heaven. He was also preceded in death by brother-in-law, Donald Morales, and grandparents Setsu & Frank Harp and Jeanne “Billie” & Andrew “Coach” Giordano. Given the current national conditions and the family’s concern for the well-being of others, a memorial mass will follow at a later date. Donations in Lester’s memory can be sent to St. Jude Children’s Research Hospital (www.stjude.org, Memorial ID 11982513) or Camp Good Grief (www.baptistgriefcenters.org), an organization dedicated to helping children deal with the loss of a loved one.

Lester Giordano, described by most who knew him as &#8220;larger than life&#8221;, passed away on Friday, April 3, 2020, at the age of 49. Lester had a magnetic personality that left a lasting impression on everyone he met. He was truly an... View Obituary & Service Information

The family of Lester Lawrence Giordano Jr. created this Life Tributes page to make it easy to share your memories.

Lester Giordano, described by most who knew him as “larger than...

Send flowers to the Giordano family.