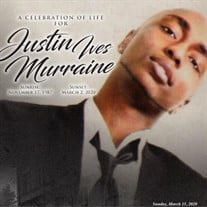 The life of Justin Ives Murraine began on November 17, 1987, in Nashville Tennessee born to Valerie Murraine Baskerville and Vanier Murraine. Justin was baptized at the age of 9 years old at Christ Missionary Baptist Church in Memphis,Tennessee. Justin attended Long Island University in Brooklyn, New York where he was studying Marketing. Justin had a flair for all things creative. He was the creative force behind Ballet On Wheels Dance School in its infancy, and he excelled in that role. He also loved fashion, and in particular he loved designer lines and cars. Justin also considered himself a food connoisseur. While in New York, he worked in many high-end retail stores in sales as well as in the non-profit sector. Justin’s carefree personality and giving spirit allowed him the ability to ebb and flow in many business endeavors providing his creativity and expertise. Justin was preceded in death by his grandfather, Samuel Murraine; his grandmother, Beatrice Murraine; uncle, Craig Murraine; aunt, Eileen Murraine; and cousin, Anthony (AJ) Davis. He quietly departed this life to begin anew on Monday, March 2, 2020, at Saint Francis Hospital in Bartlett, Tennessee. The world has truly lost a creative soul and is truly at a loss, unable to be impacted by his future gifts. To cherish his memories he leaves his loving mother and father, Valerie Murraine Baskerville and Vanier Murraine; five brothers: Roshawn Murraine, Vanier Murraine, Jr., Makale Murraine, Silas Davis-Murraine, and Maliq Murraine; three sisters: Diamond Goosby, Mchale Murraine and McKenzie Murraine; grandparents, Patricia Maclin-Lee and Charlie Maclin (Chestinia). He also leaves aunts and uncles along with other beloved family members. Justin Ives Murraine

The life of Justin Ives Murraine began on November 17, 1987, in Nashville Tennessee born to Valerie Murraine Baskerville and Vanier Murraine. Justin was baptized at the age of 9 years old at Christ Missionary Baptist Church in Memphis,Tennessee.... View Obituary & Service Information

The family of Justin Ives Murraine created this Life Tributes page to make it easy to share your memories.

Send flowers to the Murraine family.