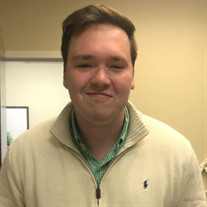 Joshua Michael Rodgers, 24, passed peacefully in his sleep at home in Memphis, TN on February 8th, 2021. Joshua was born on April 12th, 1996 to Billy and Mechele Rodgers. Josh lived the first 4 years of his life in Warwick, RI. His parents moved to Memphis in August of 2000. Josh lived the rest of his live in the Memphis area but grew up in Lakeland, TN. Josh attended Lakeland Elementary School and attended First Assembly Christian School for middle and high school. Josh graduated from FACS in 2015. After high school Josh attended college and trade school but soon realized neither were for him. While trying to decide on a career path, Josh went back to work where he and his buddies worked in high school, in the family business of Early Education at his mother’s preschool, Cornerstone Learning Center. Josh soon realized his career calling was to work alongside his mother and help shape the lives of young children. Josh worked at Cornerstone for 8 years and was recently promoted to Health and Safety Director for all campuses and was over the CRM for the schools. When Josh was not working, Josh enjoyed hanging out with family and close friends. He was an avid music lover, he enjoyed boating, fishing, reading and while Josh enjoyed video games, he preferred the fellowship of playing board games with his brothers and close friends. He is survived by parents Billy and Mechele Rodgers and two brothers Brendan (Victoria) and Ben. He leaves behind his grandparents, Earnest & Sharon Stallings, Judy (Mike) Mazza, Cathy Rodgers. His Aunts and Uncles, April (Jeremy) Ross and Matt (Kristen) Stallings, Shelly (Steve) Hamblin & Melissa (Raymond) Griffin, loving cousins and friends. He was proceeded in death by his grandfather Billy Charles Rodgers, Sr. DUE TO THE WEATHER THE SERVICES HAVE BEEN RESHEDULED. THE CURRENT TIMES ARE BELOW. The family will receive visitors from 2:00 p.m. to 5:00 p.m., Saturday, February 20, 2021 at Memorial Park Funeral Home. The Celebration of Life service for Joshua will begin 5:00 p.m. also at Memorial Park Funeral Home. Click the link below to view the service: http://webcast.funeralvue.com/events/viewer/48526 Click the link below to view Joshua's online tribute video. https://www.tributeslides.com/tributes/show/N7TCLXPW7LZDHRS9 In Lieu of flowers, donations can be made in Josh’s memory to; Le Bonheur Children’s Hospital Heart Institute P.O. Box 41817 Memphis, TN 38174-1817

Joshua Michael Rodgers, 24, passed peacefully in his sleep at home in Memphis, TN on February 8th, 2021. Joshua was born on April 12th, 1996 to Billy and Mechele Rodgers. Josh lived the first 4 years of his life in Warwick, RI. His parents... View Obituary & Service Information

The family of Joshua Michael Rodgers created this Life Tributes page to make it easy to share your memories.

Joshua Michael Rodgers, 24, passed peacefully in his sleep at...

Send flowers to the Rodgers family.