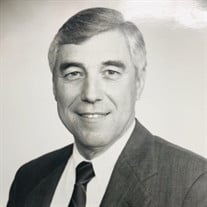 Joseph Donner (Joe) Hardesty, Jr., age 84, died peacefully on Tuesday, April 20, 2021. He was born in Memphis, Tennessee on June 18, 1936. He was active in the Chickasaw Council Boy Scouts and in the youth group at Epworth Methodist Church. He graduated from Treadwell High School, and continued his education later graduating from Memphis State University with a B.S. in Math while also completing their Air Force ROTC program. He was commissioned in the United States Air Force as a Second Lieutenant, stationed at McConnell Air Force Base in Wichita, Kansas. After finishing his active duty service, he continued in the reserves attaining the rank of Captain before being honorably discharged. After his active duty service was over, Joe returned with his family to Memphis and began his work in the banking industry. He had a successful career in Commercial Finance working ultimately as a Senior Vice President in the lending function for several banking institutions including First Tennessee, Sovran Bank, Nations Bank and ultimately retiring as a Senior Vice President from the Bank of America. When the work day was over, Joe loved nothing more than to head for the outdoors for the weekend. He was an avid fisherman and a long-term member of the Backlasher’s Bass Club. Joe was also an avid hunter enjoying the wild life at his cabin in Decatur County as often as possible. He took numerous trips to Colorado expanding his hunting pastime to elk in that area and becoming a regular at the Blue Creek Ranch in Wagon Wheel Gap, Colorado. Despite his battle with dementia, he had an excellent attitude and always maintained his quick wit and humor. He was very appreciative of the kindness and care shown him by the staff at Schilling Gardens where he was fondly referred to as “CJ” for “Cool Joe.” Mr. Hardesty is survived by his children, JoAnne (Bob) Henegar, Brad Hardesty, Lisa (Allan) Mosier, Carla (Clay) Smith, Pam (David) Barthel, Robert Little and Steve Metcalf, 11 grandchildren and 4 great-grandchildren. Mr. Hardesty was preceded in death by his wife, Jean Hardesty, parents, Joseph Donner Hardesty, Sr. and Helen Francis Pope Hardesty and brother, Eugene Hardesty. The family will receive relatives and friends Tuesday, April 27 at 1:30 p.m. with a funeral service at 2:30 p.m. at the Fireside Chapel of Memorial Park Funeral Home. Interment to follow at Memorial Park Cemetery. Memorial Park Funeral Home and Cemetery, 5668 Poplar Ave, Memphis, TN, 38119. (901) 767-8930 In lieu of flowers, please send memorials to the Alzheimer's Association at https://www.alzfdn.org.

Joseph Donner (Joe) Hardesty, Jr., age 84, died peacefully on Tuesday, April 20, 2021. He was born in Memphis, Tennessee on June 18, 1936. He was active in the Chickasaw Council Boy Scouts and in the youth group at Epworth Methodist Church.... View Obituary & Service Information

The family of Joseph Donner Hardesty, Jr. created this Life Tributes page to make it easy to share your memories.

Send flowers to the Hardesty family.