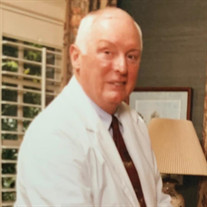 Jon A. Simpson, DDS, MAGD Dr Simpson was born on April 6, 1938, the second son of David and Allane Shuttleworth Simpson of Memphis, TN. He graduated from Memphis Central High School (1956) and Southwestern at Memphis (now Rhodes). He then attended the University of Tennessee College of Dentistry and graduated in 1963. Following dental school, he served as captain in the U.S. Army Dental Corps at Fort Benning, GA, where he met his lifetime sweetheart, Caroline Morris, of Fort Gaines, GA. Subsequently, he established a private practice in Memphis (Parkway Village). In 1998 Dr Simpson built a dental clinic in Germantown where he practiced the remainder of his forty five year career. Dr Simpson has held offices in both local and state dental societies. In July, 1985 Dr. Simpson received the “Masters Award” from the Academy of General Dentistry. The Academy of General Dentistry is the largest organization in dentistry which grants awards for post graduate scholarship, and the Mastership is the highest award given. In addition, Dr. Simpson has received fellowships from the AGD< the AES (American Endodontic Society), and the ADI (Academy of Dentistry International). At Second Presbyterian Church of Memphis, Dr Simpson served as Sunday School Teacher, Deacon and Elder. He also served as chairman of the youth for Christ Board of Memphis and as a leader in Memphis Men’s Bible Study Fellowship. He and Caroline joined Bellevue Baptist in 1988, and he served as Evangelic Explosion leader, and as a deacon. In addition, Dr Simpson served on the PSALMS Board which governs Kirby Pines Senior Community ands more recently on the LUKE Board which governs the Farms at Bailey Station Senior Community. As an avid jogger, Dr Simpson ran a regular two-mile course in the path behind his east Memphis home. Jogging became a part of his daily routine, and until his demise, he had not missed a single day since August 1971. Consequently, in August 2011 the USRSA (United States Running Streak Association) awarded him a plaque commemorating 40 years without missing a single day and naming him “runner of the year.” The Wall Street Journal ran an article when the plaque was given. Dr Simpson leaves his beloved wife, Caroline, and his wonderful son, Grant, who will follow him to heaven later. One of his favorite verses was John 1:12 For as many as received Him (Jesus) to them gave He power to become sons of God. The family has requested that in lieu of flowers donations be made to Bellevue Baptist Church Health Center, the Union Mission or Lebonheur Children’s Hospital

Jon A. Simpson, DDS, MAGD Dr Simpson was born on April 6, 1938, the second son of David and Allane Shuttleworth Simpson of Memphis, TN. He graduated from Memphis Central High School (1956) and Southwestern at Memphis (now Rhodes). He then... View Obituary & Service Information

The family of Jon Alan Simpson, DDS,MAGD created this Life Tributes page to make it easy to share your memories.

Send flowers to the Simpson, family.