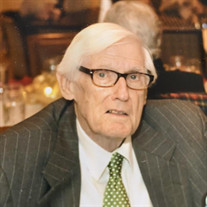 John M Greene, Jr., 88, of Memphis, Tennessee, passed away on Wednesday, January 5, 2022. He was born on October 6, 1933, to John and Elizabeth Greene in Nashville, Tennessee, where he grew up. John attended Vanderbilt University, and he served in the United States Navy. In 1973, he married Sally Verna Anderson, and she was truly the love of his life. John was an active member of Independent Presbyterian Church where he served as deacon and on several building committees. Upon discharge from the Navy in 1967, he planned to return to his hometown of Nashville, but was encouraged to interview with a new up-and-coming company, Holiday Inn. He decided to interview so that he could, in his words, "...get experience interviewing for jobs," but was hired and spent the lion’s share of his career working for Kemmons Wilson in Memphis during the heyday of the company. John would later work for other companies in the same field, but his most cherished season was working with Kemmons to build Holiday Inns all over the world. John loved his family, travelling with Sally, the city of Nashville, and Scotch. He was a dessert connoisseur, and he made a point to always say yes to chocolate. He had an eye for (and an opinion about) interior design and spent much of his time buying, restoring, and doting on antique furniture. John gave the best hugs, and every kid in his family knew that when he saw them he was going to joyfully exclaim “I’m gonna squeeeeeze you to death” while he hugged them close. He is survived by his step-son, Richard Rieves (Rachel), of Memphis, TN; five grandchildren—Whitney (Jed), Grace (David), Ashley (Nathan), Loyd (DeeAnn), and Amy Katherine (Tom); nine great-grandchildren; nieces Gerrye (Ken) and Elizabeth; nephews Mitchell (Dee) and Rick (Barbara); his brother-in-law, Fred; and many more loving great-nieces and great-nephews. He was preceded in death by his parents; his bride, Sally; his step-son, Elton Allison Rieves, IV; his sisters, Joy Cooke, Nancy Turner, and Betty Greene; and his nephew, Lea Cooke. A small memorial service will take place on Friday, January 7, 2022, at 11:30 a.m. in the Chapel at Independent Presbyterian Church (4738 Walnut Grove Road, Memphis, TN). In lieu of flowers, the family suggests memorial donations be made to the Downtown Church Building Fund (Downtown Church, PO Box 3923, Memphis, TN 38107 (Memo: Building Fund), or go to www.downtownchurch.com/give).

John M Greene, Jr., 88, of Memphis, Tennessee, passed away on Wednesday, January 5, 2022. He was born on October 6, 1933, to John and Elizabeth Greene in Nashville, Tennessee, where he grew up. John attended Vanderbilt University, and he served... View Obituary & Service Information

The family of John M. Greene Jr. created this Life Tributes page to make it easy to share your memories.

Send flowers to the Greene family.