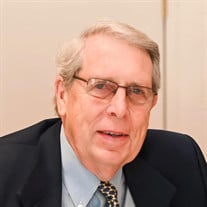 Jerry Guy Wilhite, age 79, passed away on May 3, 2022, in Eads, TN. Jerry was born in Fairhope, Alabama, on March 16, 1943. His family moved to Memphis where he grew up. He graduated from Kingsbury High School where he was president of the student council and held other scholastic honors. He was an avid reader and loved history. He went on to graduate from Memphis State where he played basketball and baseball and was also the first local Memphian to receive an athletic scholarship from MSU. He was a huge Memphis fan and enjoyed going to games. Go Tigers Go! He served as a medic in the Army Reserve and upon his return, started his lengthy career in the local Memphis printing industry. Among his many interests was a passion for golf and traveling with his wife, Donna. Jerry was always planning their next trip. They also loved spending time at the cabin that they built together. For many years, every Monday, he played golf with his buddies at Galloway Golf Course. He was active in the Presbyterian faith and had served as an elder for many years. Most recently, he was a member of Germantown Presbyterian Church and appreciated his many friends there. He is survived by his wife of 58 years, Donna Yarbrough Wilhite; his son, Todd (Lindsay) Wilhite of Jackson, Tennessee; his son, Steve (Amy) Wilhite of Memphis, Tennessee; his grandchildren, Jack, Catherine, Mary, and Walker Wilhite; brother, Larry (Inge) Wilhite; and brother, Bill Wilhite. He is preceded in death by his parents, Guy and Florence Wilhite; and brothers, Bob and Don Wilhite. In lieu of flowers, memorials may be sent to Pinecrest Camp and Retreat Center, PO Box 36, LaGrange, TN, 38406 (camppinecrest.org); or Germantown Presbyterian Church, 2363 Germantown Rd, Germantown, TN, 38138. Visitation will be on Saturday May 14th at 10:00 a.m. with a service at 11:00 at Memorial Park Funeral Home 5668 Poplar Ave Memphis, TN. Inurnment will follow at Memorial Park Cemetery.

Jerry Guy Wilhite, age 79, passed away on May 3, 2022, in Eads, TN. Jerry was born in Fairhope, Alabama, on March 16, 1943. His family moved to Memphis where he grew up. He graduated from Kingsbury High School where he was president of the... View Obituary & Service Information

The family of Jerry Guy Wilhite created this Life Tributes page to make it easy to share your memories.

Send flowers to the Wilhite family.