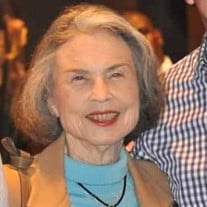 Jane Reed Caffey died peacefully on Saturday, February 13, 2021. She was born on June 21, 1931 in Tupelo, Mississippi, the only child of Adlai Kipling Reed and Jennie May Garmon Reed. Jane always described her childhood as idyllic, and she said she never felt like an only child because of her many Reed cousins. She attended Randolph-Macon Woman's College in Lynchburg, Virginia. A cousin introduced her to Dr. Shed Hill Caffey, and they married in 1952. In 1960, Shed was offered a pediatric fellowship at Great Ormond Street Children's Hospital in London. The family lived there for a year and traveled widely. The experience sparked a love of travel that Jane and Shed enjoyed for more than forty years, visiting all of Europe, Russia, China and several countries in Africa. The family returned to Memphis in 1961, and Jane spent that decade raising her three children and working tirelessly as a volunteer. During the 70s and 80s, Jane served as office manager of her husband's pediatric practice, work that she loved because she got to know so many families. Jane and Shed were charter members of Christ United Methodist Church. Jane taught the fifth grade Sunday school class for 20 years. After retiring, Jane spending countless hours delivering Meals on Wheels, often with her grandson David. In 2008, Jane and Shed moved to Town Village, not long before his death in 2009. Jane was known for her rigorous self-discipline. She prided herself on the fact that she weighed less than the day she married. She ate a healthy diet throughout her life, except for the occasional indulgence of a Huey Burger, and she did at least one exercise class every day. Jane had great organizational skills and she liked to get things done, which earned her frequent eye rolls from her children. Jane had astonishing energy, and it was always evident to the residents of Town Village. Her children joked that she was the "cruise director" there, always trying to make things fun. Jane's sense of perception was extraordinary. She could read people uncannily, and she was a ready listener when someone was troubled. She was fiercely independent, so it was a blessing that she was razor sharp and physically vigorous till her last day. Jane was a loyal wife, a steadfast friend, and most of all, a loving and devoted mother and grandmother. She is survived by her three children, Kip Caffey (Jan) of Atlanta, Betsy Caffey of Nashville and David Caffey (Margaret) of Memphis. She is also survived by her five grandchildren, Grace Caffey, Reed Eliff (Brian), Liz Caffey, Lee Caffey and David Caffey, Jr. (Jackie). The family will hold a celebration of Jane's life for her friends and family later in the year.

Jane Reed Caffey died peacefully on Saturday, February 13, 2021. She was born on June 21, 1931 in Tupelo, Mississippi, the only child of Adlai Kipling Reed and Jennie May Garmon Reed. Jane always described her childhood as idyllic, and she said... View Obituary & Service Information

The family of Jane R. Caffey created this Life Tributes page to make it easy to share your memories.

Send flowers to the Caffey family.