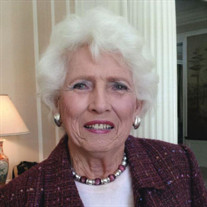 Jamie was born March 29, 1926 to Edith Peck and James Howell Branch of Homeplace Farm, Early Austin Road, Crockett County, TN. She grew up in Richmond, Winchester, and Murray, KY due to her Dad’s sales position at Ralston Purina Company. At 13, the family moved to Humboldt, TN, where Jamie graduated high school. Her parents (Dede and Daddy) moved to Memphis while she studied/graduated, in 1945, from Christian Junior College for Girls in Columbia, MO. She transferred to Duke University, where she graduated in 1947 with a BA and honors. There, she was a member of Kappa Alpha Theta sorority, the Social Standards committee, the Pegasus W.A.A and was on the Dean’s List. She met her future husband, a prominent Memphian, Blair Wright (SAE, ODK, Southwestern Univ.) shortly thereafter, and they were married in Jan 1948. Their 3 children, Chris, Jennie and James Blair were her pride and joy. She spent her life in Memphis as a homemaker and loving friend to them as well as her many cousins, as she’d grown up an only child. Jamie enjoyed gardening, tennis, golf, sailing, nature, and especially birding and was a loyal member of the TOS (TN Ornithological Society), and Evergreen Presbyterian, which she and Blair joined in 1952 and where she taught, and was Deacon and Circle Bible leader. Her azaleas were always gorgeous and her yard was outstanding. In her middle age years she traveled extensively, some which were “birding” trips like Galapagos Islands, Kenya, Costa Rica, Alaska, Morocco, Australia. The others were for her historical/cultural interests; Great Britain, France, Spain, Italy, Egypt, Jordan, Turkey, Russia and China and many US trips with family. She loved “historical” things, especially museums, and was an expert travel guide herself after all those trips. Her TV still automatically goes to Smithsonian and NAT GEO, two of her favorite channels. She was a lifelong member of The University Club of Memphis, and the Maternal Welfare League, the LeBonheur Club, the LeBonheur Travel-Study club, Circle of Flowers Garden Club, DAR Chickasaw Bluff Chapter, Colonial Dames of the 17th century, Chatauqua Chapter, and The Peace Circle of the Kings Daughters and Sons and local museums Dixon Gallery, Brooks Art Gallery and Memphis Botanic Garden. She supported many environmental organizations along with the Girl Scouts, where she was an Adult Council consultant. Her daughters Chris and Jennie were members of Mariner Ship 158, (sailing troop) where Jamie was also Cookie Chairman, but only once! The tutoring for reading that she did at the Neighborhood School for K +1st grade was very special to her. She loved being around the children and they loved her back. She played tennis for decades, and finally retired her racquets in her mid 80s, but she always competed fiercely for League trophies, her secret to maintaining physical stamina. She was amazingly beautiful until the very end. Jamie was preceded in death in 2004 by her husband Blair, VP Design/Construction, Hampton Inns Inc., and is survived by her 3 adult children, Chris Wilson of Cordova (widow of Bill Wilson), Jennie Wright of Memphis and Blair and Debbye Cruze Wright of Knoxville, 3 adult grandchildren (Natalie Wright of Oak Ridge and Ben Wright of Knoxville TN), and Katie and Dan Trenda, soon to be of Orlando, FL and Jamie’s 4 (Trenda) great-grandchildren Jack, Will, Audrey, and Luke. She has numerous cousins from California to North Carolina, and kept up with them regularly. She wrote to the Blair relatives in Pennsylvania, England and Scotland regularly and had a Russian doctor for a pen pal. The Duke Univ. alumnae group, the Theta group, the Christian College group and the Humboldt High group of longtime friends also benefitted from her desire to “stay in touch.” Jamie referred to herself as a country girl and she was a bit of a tomboy, that’s true, but she had friends in all strata of society and enjoyed visiting/traveling with each of them. Her beautiful white hair and her suntanned figure helped her stand out wherever she went, along with an engaging personality, a warm smile, and great legs! The visitation will be held Friday, April 30th at Memorial Park Cemetery and Funeral Home, 5668 Poplar Avenue, Memphis 38119 from 12 noon to 130 pm, followed by the funeral service at 130 pm in the chapel, followed by a brief entombment program at the Mausoleum. A life celebration reception for Jamie will take place at the Wright home following the conclusion of the entombment service. Memorials can be sent to The LeBonheur Club of Memphis, 1047 Cresthaven Rd 38119, The Audubon Society Strawberry Plains Center (hummingbird banding and migration study), 285 Plains Rd, Holly Springs MS 38635, or the MidSouth Raptor Center, (rehabilitation of injured birds) 1176 Dearing Rd. 38117, her favorite local charities.