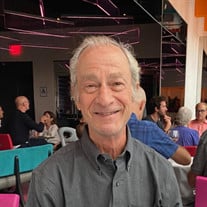 James (“Jimmy”) Samuel Segerson, passed away February 4, 2022, at the age of 75. Jimmy was born May 9, 1946, in Memphis, TN to Dr. Edward Carmack Segerson and Ann Foppiano Segerson of Memphis. Jimmy was a graduate of Christian Brothers High School and University of Memphis, where he earned a B.S. in Biology. He married the love of his life, Linda Paulo Hendrix, in 1968. Jimmy was well known in the Memphis music scene for more than 50 years. A multi-instrumentalist and vocalist, he performed, wrote, and recorded music with bands such as Moloch, the Shades, the Mystic Nights, and the Agitators. In his most recent band, J-Train, he was very proud to have his son, Jonathan, join him as percussionist. Jimmy also composed the original music for the award-winning documentary film, Circus Rosaire, directed by his niece, Robyn Bliley Wilson. Jimmy was an accomplished horseman, riding for many years with the Longreen Hunt Club and competing in many horse shows in the Memphis area and beyond. In recent years, he swapped out the horses for his bicycle and enjoyed riding many miles with Linda throughout Memphis, New Orleans and New York City. Always at the ready with a joke, a smile, and a big hug for everyone, Jimmy was known for his great sense of humor. He never met a stranger and made friends everywhere he went. Jimmy was predeceased by his parents and will be missed by his wife of 53 years, Linda; son, Jonathan Edward Segerson; granddaughter, Samantha Hollingsworth; brother, Edward (Eddie) Segerson; and sisters, Sheila Segerson and Sharon Stuart; as well as many other friends and family including Linda’s sister, Delane Hendrix Weber, and extended family in Rio de Janeiro, where he travelled numerous times.

The family of James "Jimmy" Samuel Segerson created this Life Tributes page to make it easy to share your memories.

Send flowers to the Segerson family.