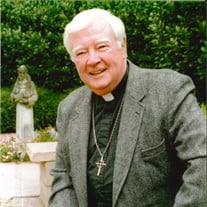 Reverend James "Jim" Frederick Marquis, Jr. died at the age of 91 in Memphis, Tennessee on Monday, July 19, 2021. Reverend Marquis was the son of Canadians, Thelma Armour Marquis and James Frederick Marquis. He was born in New York City, New York on April 3, 1930 and subsequently grew up in Hawthorne, New Jersey. Jim fled the north for the serenity of the South. He attended and graduated from Tusculum College in Greenville, Tennessee. Upon graduation, Jim entered the Army where he served as a corporal from 1951 through 1953. In 1952, Jim married the love of his life and college sweetheart, Emma Lou Shipley from Kingsport, Tennessee. Jim began a career in insurance sales with bennet & Edwards until he was called by the Lord to the episcopal priesthood in 1969. Jim attended seminary at The University of the South (Sewanee) graduating in 1972. Jim's first parish was in New Johnsonville, Tennessee at the only Episcopal church in town. In 1976, Jim was called to be the rector of St. Paul's Episcopal church in Murfreesboro, Tennessee. In the 1990s, he was called to his last church as rector at St. Martins Episcopal Church in Chattanooga, Tennessee. After retirement, Jim and Emmy moved to Memphis, Tennessee to be near family. Jim continued to provide relief work for vacationing priests in the area until he was in his late 80s. Jim belonged to numerous organizations, but his favorite was the East Memphis Rotary where he spent many a fun Wednesday lunch with friends. He was a Paul Harris Fellow with the Rotary as well as the chaplain. Jim is survived by his wife of almost 70 years, Emmy Marquis; his son, James F. Marquis, III of Denver, Colorado and his daughter, Kay Marquis Anderson (Keith) of Memphis. He was predeceased by his parents, and his son, Jeff Marquis (Carol) of Kissimmee, Florida. Jim enjoyed the company of his grandchildren: Dustin Daly, Skylar Marquis, Cody Marquis, Jordan Anderson Royals, and Kendall Anderson. He had five great grandchildren. A memorial service will be held at St. George's Episcopal Church, 2425 S Germantown Rd, Germantown, Tennessee on Wednesday, July 28, 2021 at 2:00 p.m. Memorials may be sent to St. George's Church or the charity of the donor's choice. As Jim would always say in parting "peace be with you".