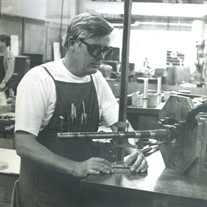 Jack Lynn Hutchens, 81, of Memphis, Tennessee, passed away on December 6, 2020 after a brief illness. Jack is survived by his wife of 46 years, K. Ann Cupp Hutchens, son, Alvin Hutchens (Julie), and grandchildren, Tucker, Cooper, and Poppy Lou Hutchens. He also leaves behind his brother, Richard Hutchens (Iris), and sister, Mickey Hutchens, as well as many beloved nieces and nephews. Jack is preceded in death by his parents, Mildred and Wiley Hutchens Jr; two sisters, Peggy Bican and Rebecca Hutchens; and three brothers, Joe, Douglas and Stephen Hutchens. At the age of 17, Jack began working for International Harvester, retiring 32 years later at the age of 49. He greatly enjoyed the game of golf for many years after retirement. Due to current health concerns, a private funeral service and burial will be held at Memorial Park Funeral Home and Cemetery, 5668 Poplar Avenue in Memphis. The service will be webcasted, click the link below to watch: http://webcast.funeralvue.com/events/viewer/42466 Memorial donations can be made in Jack's memory to cureCADASIL Association at www.cureCADASIL.org or ACE Awareness Foundation at www.aceawareness.org

Jack Lynn Hutchens, 81, of Memphis, Tennessee, passed away on...