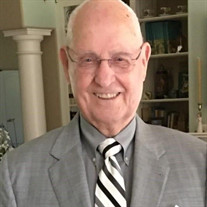 Herschel Leroy Powell passed away at home on July 27,2020 He was born in Oklahoma City May 29, 1926 to George and Kathryn Powell. He had four brothers and two sisters. Danny Powell is the youngest brother. He and his wife Caroline reside in Nacogdoches, Texas. Herschel served in the United States Navy during WWII on the USS LACKAWANNA in the Pacific Theatre. After the war, he attended Texas Tech. As a professional engineer, he was licensed in over thirty-five States. He had been a member of ASHRAE, American Society of Heating, Refrigeration and Air conditioning Engineers, he also had been a member of ASPE, American Society of Plumbing Engineers. He was in business with his son Rob, for over forty-five years when he retired at the age of ninety. Herschel moved to Memphis in 1953 with his young family. His first wife, Betty Lou (Youngblood) and their two boys Danny and Rob. Herschel was instrumental in bringing the new science of air-conditioning to the mid-south. Herschel and Betty were married and devoted to one another for thirty-six years when Betty sadly passed away. Herschel was an active member of the Seventh-day Adventist Church and served in all capacities in both Raleigh SDA Church and Memphis First SDA Church until his death. He particularly enjoyed having Friday night Bible studies in his home. Herschel personified unconditional love and service, Love for his family and his fellow man, ans Service to his community. Most of all, Herschel Loved, served, and honored God. Herschel is preceded in death by a Son, Danny Dale Powell. He leaves behind his loving wife of 37 years, Rita Foster Powell, Son, Robert Herschel Powell (Hope). 5 Grandchildren; Heather Frederick, Deidre Cuartas, Kathryn Vaughn, Robert S. Powell, Michelle Goodman, 12 Great Grandchildren, 3 Great Great Grandchildren. Memorials can be sent to Memphis First SDA Church for building upkeep. Herschel always gifted his services when building or remodeling SDA churches. The family request that everyone dress casual. Those who are unable to attend please follow attached link for live web casting. http://webcast.funeralvue.com/events/viewer/34552

Herschel Leroy Powell passed away at home on July 27,2020 He was born in Oklahoma City May 29, 1926 to George and Kathryn Powell. He had four brothers and two sisters. Danny Powell is the youngest brother. He and his wife Caroline reside in... View Obituary & Service Information

The family of Herschel L Powell created this Life Tributes page to make it easy to share your memories.

Send flowers to the Powell family.