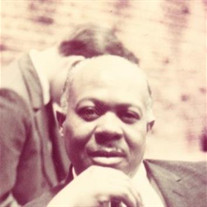 Herbert Fugate, aged 89, died Sunday February 16th, 2020. Born March 27, 1930 in West Virginia to Vincent and Inez Fugate, he was the second of six children. Mr. Fugate (Herb, to his friends) is survived by his wife of 66 years, Willa Mae Fugate; his sister: Loris Caraballo; his three daughters: Suedrina Mayfield, April Holland, & Deneen Yelizarov; six grandchildren: Tinola Mayfield-Guerrero, Asha Holland, Jenae Mayfield, Alexander Holland, Austin Holland, & Leandra Mayfield; and two great-grandchildren: Octavius & Vladimir Guerrero. He was a frequent traveler, visiting many states and several countries. In his younger years he served two tours in the U.S. Army, one in occupied Germany and the other in Korea; he was honorably discharged in 1958. Where after, he moved to Brooklyn, New York; working for many years as a Boiler Engineer; before moving upstate to Buffalo, New York, and then to Toledo, Ohio; before finally settling in Memphis, Tennessee. Herbert Fugate was a devoted member of Jehovah's Witnesses. Baptized in 1973, he was an avid Bible reader, and not a day went by without Herb expressing his faith in, and reliance on Jehovah God; whom he credited with guiding and sustaining him through life trials. Fishing was his favorite hobby, but he also was fond of tackling home improvement projects, and building bird houses. Most of all, he loved visits from his family and friends, especially his grandchildren & great-grandchildren. A Gathering of Family and Friends will be held on Saturday, March 7th from 1:00 pm until 3:00 pm at Memorial Park Funeral Home and Cemetery, in the Parkside Event Center at 5668 Poplar Avenue in Memphis, TN 38119. Arrangements have been entrusted to Memorial Park Funeral Home and Cemetery, 5668 Poplar Ave., Memphis TN 38119. (901) 767-8930. "A Fitting Farewell for Everyone."

The family of Herbert Thomas Fugate created this Life Tributes page to make it easy to share your memories.

Send flowers to the Fugate family.