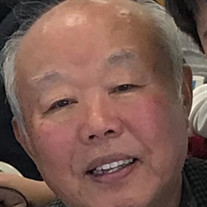 Henry K. Koh (81) affectionately known as “Habi” by his grandchildren, passed away peacefully January 6, 2022 in Memphis, TN with his two children at his bedside. Habi was born in South Korea on December 12, 1940 and emigrated to West Memphis, AR in 1974. He was a loving and kind husband, father and grandfather. Habi was retired at the time of his passing. Prior to his passing, he was the owner of Razorback Cleaners. He also served many years as the President of the Memphis Korean Association, served on the board of the National Korean Association, a member of Korean Baptist Church, and he helped establish the Han-Gul Hakyo (Korean Language School) where Korean-American children could go and learn how to read and write the Korean language. In his spare time, Habi developed a love for American music and enjoyed listening to Elvis, Frank Sinatra, and the Bee Gees. His love of the Bee Gees started when he was younger and he loved to go dancing. Habi loved to travel, spend time with his family and friends, but above all, he lived to be with the love of his life, Jae, whom he was married to for over 50 years. They balanced each other perfectly as he was gentle and soft-spoken, and she was the life of the party. It was very rare to see one of them without the other. They really were soul mates and are once again reunited. Anyone who knew him was touched by his gentleness, kindness, and generosity. Habi was a man of very few words, but his actions spoke immensely of his character. He was a true peacemaker and always a source of positivity to those around him. He was always a glass half full kind of man, and he lived his life supporting and encouraging others. Habi is survived by his older brother Meung Kyun Koh of Seoul, South Korea, two children, Seung Chan Koh and Sandra Koh Miller, both of Memphis, TN, three grandchildren, Henry, Theodore and Gabrielle, and many extended family members and friends who already miss him. Habi was predeceased by his parents and his loving wife, Jae Hean Koh. Due to the rising cases of COVID in our community, the family has chosen to have a private service. Additionally, the family would like to thank his wonderful caretakers Mrs. Dorothy Washington and Mrs. Dorothy Adams, the nurses and staff from 3 West at Baptist Memphis, and the nurses at Baptist Trinity Hospice for their loving and compassionate care. In lieu of flowers, the family requests that any donations be made to the West Cancer Foundation (7945 Wolf River Boulevard, Germantown, TN 38138 - https://westcancerfoundation.org/get-involved/) or any cancer foundation of their choice.

Henry K. Koh (81) affectionately known as &#8220;Habi&#8221; by his grandchildren, passed away peacefully January 6, 2022 in Memphis, TN with his two children at his bedside. Habi was born in South Korea on December 12, 1940 and emigrated to... View Obituary & Service Information

The family of Henry K. Koh created this Life Tributes page to make it easy to share your memories.

Henry K. Koh (81) affectionately known as “Habi” by his grandchildren,...

Send flowers to the Koh family.