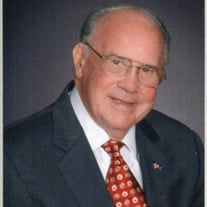 Harry Gene Bogard, 88, of Germantown, TN, passed away November 27, 2020. Born February 29, 1932 in Memphis, TN, he was the son of Lawrence Bynum Bogard and Florence Pegram Bogard. He graduated from Tech High School in 1950 where he met his wife of 71 years, Ann Moore Bogard. He worked briefly for General Truck before enlisting in the Navy. After serving on the U.S.S. Bushnell in Key West, FL, he and Ann returned to Memphis where he began a career in the parts division for several local General Motors dealerships. His dedication and hard work as Parts Manager of Chuck Hutton Chevrolet helped it to become the leading dealership-owned auto parts wholesaler in the U.S. Harry was a well-liked and respected friend to many. He was generous to everyone he met and took a genuine interest in their lives. He had a natural curiosity about space, science, and history and always had stacks of books and magazines around him. He spent years researching family genealogical records and would happily share that information with anyone who reached out looking for information about their ancestors. Upon retirement he enjoyed serving. He helped with his neighborhood association as well as volunteering at church and attending weekly men’s bible study groups. The Men’s Fish Fry at First Evan was one of his favorite times of fellowship, sharing the love of Christ with his friends, new and old. He also took an active, loving role as Paw Paw to his grandchildren. He shared his love of coin collecting and natural curiosity about life with them. Their lives are better for having had him as their grandfather. Harry was preceded in death by his granddaughter, Kaleigh, whom he is now able to spoil for all of eternity in heaven! Harry loved his family very much and is survived by his wife, Ann Moore Bogard of Germantown, TN. He is also survived by his son and daughter-in-law Michael & Diana Bogard of Loveland, CO; his daughter and son-in-law Lisa & Kevin Riordan and his grandsons, Jacob and Casey Riordan of Memphis; his brother and sister-in-law Ronnie & Dolly Bogard of Southaven, MS; and his sister and brother-in-law Gail & James Joyner of Collierville, TN. Because of COVID, there will be a private graveside service for the family. Interment will be in Memorial Park Funeral Home. In lieu of flowers, the family requests memorials be made to St. Jude Children’s Hospital.

Harry Gene Bogard, 88, of Germantown, TN, passed away November 27, 2020. Born February 29, 1932 in Memphis, TN, he was the son of Lawrence Bynum Bogard and Florence Pegram Bogard. He graduated from Tech High School in 1950 where he met his wife... View Obituary & Service Information

The family of Harry Gene Bogard created this Life Tributes page to make it easy to share your memories.

Send flowers to the Bogard family.