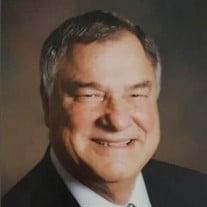 George S. Petkoff, longtime Memphis attorney and a pillar of the legal commnity passed away on October 3, 2020, surrounded by his family, after a short illness. Mr. Petkoff was predeceased by his father, George S. Petkoff, his mother, Florine Petkoff Walters and his sons, Douglas Petkoff and Richard Petkoff. He is survived by his wife of 37 years, Pat Chapman Petkoff, his son, George Petkoff, Jr., his sister, Betty Petkoff Hightower and his brother, Stephen Petkoff (Pat). He is also survived by 5 grandchildren, Tony Petkoff (Christi), Timothy Petkoff, Angela James (Matt), Kyle Petkoff, and Joseph Petkoff (Holley), and 7 great grandchildren. Mr. Petkoff was born in Helena, Arkansas, on December 5, 1936. He graduated from Sacred Heart Academy before moving to Memphis to continue his education at Christian Brothers University, where he earned a business degree. He received a J.D. degree from the University of Memphis Law School, graduating cum laude. He initially joined the law firm of Nelson, Norville, and in 1976 opened his own law firm. After obtaining his private pilot's license, his love of planes led him into the practice of aviation law. He helped to establish the practice of aviation law in Tennessee and represented the Memphis-Shelby County Airport Authority, major airlines, private pilots, aircraft manufacters, owners and mechanics. He was well-known and respected throughout the country for his knowledge and expertise in this field. David Feigelson was his longtime friend and partner at the Memphis law firm of Petkoff and Feigelson. Mr. Petkoff served as Of Counsel at the firm until his death. Mr. Petkoff was a member of the American, Tennessee and Memphis Bar Associations as well as the Federation of Defense and Corporate Counsel, Defense Research Institute and the Lawyer-Pilots Bar Association. He had the honor of presenting the State of the Law address at Southern Methodist University's Aviation Law Symposium on two occasions. He was a member of the Church of the Holy Spirit, Knights of Columbus, and Toastmasters. As an avid hunter and fisherman, he traveled all over the country as well as in Africa and South America. He loved to fish on his beloved Greer's Ferry Lake. He had many friends over the years who joined with him in these activities. He and his wife loved to travel and enjoyed visiting many countries. He loved to dance and was always gracious to the ladies, asking them all to dance. Everyone will remember Mr. Petkoff for his big grin and gregarious personality. He was loved by many and will be remembered by all. The family will receive relatives and friends on Wednesday, October 7th from 12:00 pm until 1:00 pm, a graveside service will be at 1:00 pm, Memorial Park Funeral Home and Cemetery, 5668 Poplar Avenue in Memphis. At the request of the family, memorial contributions may be made to St. Jude Children's Research Hospital, click the link below to be directed to their website: https://www.stjude.org/donate/donate-to-st-jude.html?sc_icid=header-btn-donate-now

George S. Petkoff, longtime Memphis attorney and a pillar of the legal commnity passed away on October 3, 2020, surrounded by his family, after a short illness. Mr. Petkoff was predeceased by his father, George S. Petkoff, his mother, Florine... View Obituary & Service Information

The family of George S. Petkoff created this Life Tributes page to make it easy to share your memories.

George S. Petkoff, longtime Memphis attorney and a pillar of...