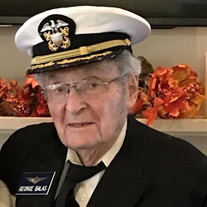 George I. Balas, MD, Captain (Ret), USN Medical Corps, age 95, passed away peacefully in Germantown TN, on Friday, February 7, 2020. Dr. Balas was born in Budapest, Hungary, on April 9, 1924, to Magda (Jozsa) Balas and Andrew Balas). He married the love of his life, Mary Evelyn, in 1958. After fighting in the Hungarian Resistance in World War 2, he worked for the US Army as an interpreter in war crimes investigation. He came to the US in 1949, got his undergraduate degree in Chemistry from University of Pennsylvania in 1952 and his medical degree from the University of Pennsylvania Medical School in 1956. After completing his internship year in Bethlehem, PA, he became a flight surgeon in the US Navy, subsequently becoming an anesthesiologist who pioneered in the area of regional anesthesia. After retiring from the US Navy (Anesthesiology), he had a fulfilling career as an anesthesiologist at the University of Tennessee Hospitals. He loved his America deeply, and was involved with the Association of Naval Aviation, The Retired Officers Association, The Military Order of World Wars, and Forever Young. He loved to travel, and had a lifelong passion for soccer, as a fan and as a player on a community team called “The Misfoots” in the 1980’s. He lived for his family, and not a day went by that he didn’t express his gratitude for his family and his country. If his family needed anything (including the moon), he would do his best to provide it, and then ask “Is there anything else you need?”. He is survived by, and will be forever and deeply missed and honored by, his wife of 61 years (Mary Evelyn), four children: Andrea Balas Weaver (Rick), Lisa Balas Douglas, Manci Balas Hoesley (Craig), and George A. Balas. He had eight grandchildren: Alexis, Erin, Jackson, Adam, Maggie, Isabella, Sam, and Luke. He had a beloved dog Chloe. His legacy will live on in his family, and in the many anesthesiology residents he taught over the years. There will be a memorial service/celebration of his life, on a later date. In lieu of flowers, the family requests that donations be made to the following charities: The George Balas Scholarship/care of Association of Naval Aviation/El Dorado Squadron (contact [email protected]), Forever Young Veterans (P.O. Box 1381, Collierville TN 38027), or The Wounded Warrior Project. His favorite song was Kate Smith’s “God Bless America”, which expressed his love for his country. Please think of him whenever this song is played.

The family of George I. Balas, MD created this Life Tributes page to make it easy to share your memories.