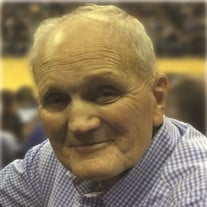 Frederick “Fred” Newton Harrison, Jr. of Memphis, Tennessee, passed away on December 21, 2020, at the age of 94. He was a loving and devoted husband, father, and grandfather; he will be deeply missed as the anchor of the family. Fred wrote beautiful poems to his wife Fay; the last was written this October for her 90th birthday: Fred is such a lucky guy To find a love money could not buy 70 years is a long long time But just enough to write this rhyme The sweetest girl that ever graced this life Thank God I found her She’s my 90-year-old wife! My darling my sugar my sweetheart Love, Fred Fred was born June 9, 1926 in Yazoo City, Mississippi, son of Frederick Newton Harrison, Sr. and Rosa Johnston Harrison. Fred graduated from Yazoo City High School in 1943, where he excelled in athletics, the marching band, and was a Boy Scout. After high school, he was awarded an NROTC scholarship to Tulane University in New Orleans where he was initiated into Delta Tau Delta Fraternity. He served in the U.S. Navy in WWII stationed in the South Pacific on the USS Sabine and was awarded for his efforts with the American Area Campaign Ribbon, Asiatic Pacific Campaign Ribbon (4 Stars), and Victory Ribbon. He was a proud Navy veteran and treasured the honor of serving his country. After completing his service, he returned to complete his education at Tulane, graduating in 1950 with a Bachelor of Business Administration. During this time, he met his lifetime sweetheart, Fay Ann Hinrichs, a New Orleans native. They were married on June 24, 1950 at Holy Name Catholic Church in New Orleans. They celebrated their 70th wedding anniversary together this year. Fred began his career in sales in New Orleans and was a Dale Carnagie instructor. Ultimately, he accepted a sales position with Scott Paper Company that moved the couple to El Paso, Texas where the first two of their four children were born. After becoming the leading salesman of the nation for Scott Paper, Fred was promoted to management, and the family transferred to Memphis, Tennessee, where they settled in Whitehaven and were blessed with two more children. The family centered their lives around St. Paul Catholic Church and School and Bishop Byrne High School where Fred was involved as a coach for his children’s ball teams, Booster Clubs as President, and many other school organizations. In 1979, he was confirmed in the Catholic Church and was a St. Paul parishioner for many years. Fred retired from Scott Paper Company in 1986 after 35 years. He was admired and respected by all who worked with him. After retirement, he enjoyed volunteering at art exhibitions including the Wonders, the Memphis International Cultural Series, Meals on Wheels, and SCV. He and Fay traveled across the country to attend his Navy reunions and connect with old shipmates. Fred and his family made regular trips to New Orleans and the Gulf. Fred was an avid sports fan and loved returning to watch the Green Wave play with his son and granddaughters who followed in his footsteps at Tulane. He also supported the Memphis Tigers and looked forward to tailgating before football games with friends. Fred was preceded in death by his parents and brother Robert Stanley Harrison. Fred leaves his wife Fay and their four children: Virginia “Ginger” Harrison Carney (David), Frederick “Rick” Newton Harrison, III (Sheri), Bruce Andrew Harrison (Hilary), and Fay Elizabeth “Fay Beth” Harrison Broughton (Mark); grandchildren Caroline Carney Smith (Scott), David Carney, Jr., John Patrick Carney, Sara Harrison, Matthew Harrison, Nicholas Harrison, Hannah Harrison, Robb Harrison, Julia Harrison, Lucille Harrison, Mae Harrison, Alexander Broughton, Elizabeth Broughton Fick (Hunter), Catherine Broughton, Dana Schwam Fisher; niece Patricia “Patty” Harrison Geiger; and four great grandchildren. A funeral Mass will be celebrated Saturday, December 26 at St. Paul Catholic Church in Whitehaven. Visitation and rosary to begin at 10 AM, with the Mass following. Private family burial at Memorial Park in Memphis. In lieu of flowers, the family requests donations to be made to St. Paul Catholic School in Memphis, TN or Tulane University Athletic Fund.

Frederick &#8220;Fred&#8221; Newton Harrison, Jr. of Memphis, Tennessee, passed away on December 21, 2020, at the age of 94. He was a loving and devoted husband, father, and grandfather; he will be deeply missed as the anchor of the family. Fred... View Obituary & Service Information

The family of Frederick "Fred" Newton Harrison Jr. created this Life Tributes page to make it easy to share your memories.

Send flowers to the Harrison family.