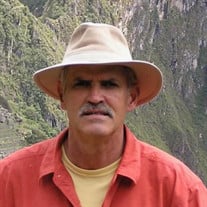 Ernesto de Armas of Piperton, TN, originally of Havana, Cuba, passed away on Wednesday, May 5th, 2021 at the age of 69. Ernesto was born July 18, 1951, in Havana, Cuba, eventually becoming the 3rd youngest in a large family of deep Catholic faith. Through Operation Peter Pan, when he was 10 years old, his parents sacrificed everything to send their children to the United States in order to escape Communism and the Castro regime. Once reunited, the family eventually moved from Miami to Puerto Rico to start a new life. He attended the University of Puerto Rico Mayagüez, eventually moving back to Florida to attend Embry Riddle Aeronautical University to pursue his dream of becoming a pilot. During this time, he flew small planes, which led him to take a job at a small airport in Lenoir, North Carolina, where he met his future wife, Jane. In 1977, Ernesto joined the United States Coast Guard, where he became a C130 pilot. This led him and his family on many adventures around the U.S., exploring the country and making new friends along the way. Eventually, he left the Coast Guard, moving to commercial airline Eastern in Miami, FL, and then to cargo airline FedEx in Memphis, TN, where he retired in 2016 after 29 years. When Ernesto was 12 years old, he and his younger brother Alberto attended Miami Park school. One day while eating Spam for lunch (a refugee staple), Ernesto noticed that it was 12/12 (December 12th) at 12:00pm and mentioned it to his brother. The following year on 12/12, when Ernesto was 13 years old, he and Alberto were once again in the lunch line, and he noticed it was noon. He asked his brother if he remembered the year prior. After that year, they moved to Puerto Rico, but as they grew up, they made sure to call each other at exactly 12:00pm on 12/12 every year, no matter where they were in the world or what it took to reach each other (in the early days this might mean calling their mom, calling the other person’s pager, etc.). When the year 12/12/12 approached, the brothers planned a big family celebration with a champagne toast at exactly noon. Ernesto and his family (including his soon to be first granddaughter) flew in to Miami from Memphis, and Alberto hosted at his home, including grilled Spam on the menu to commemorate the event. All de Armas family members were invited to celebrate that which had started so long ago. This is how Ernesto lived - making individual connections and caring for his family. Ernesto is survived by his wife of 46 years, Jane; daughter Tina and her son Ethan; daughter Julie; son and daughter-in-law, Daniel and Cindy, and their children Ella, Roman, Annabelle, and Charlotte. He is also leaving behind a beloved sister, 7 brothers and their wives, nieces and nephews, and many more cherished family and friends. He was preceded in death by his mother Aleida and his father José Tomás. Funeral Mass for Ernesto is scheduled for Monday, May 10, 2021 at 11:00am at St. Michael’s Catholic Church in Memphis, TN. In lieu of flowers, donations can be sent to: ALS Association TN Chapter PO Box 402244 Nashville, TN 37204 or click the link below: http://webtn.alsa.org/site/PageServer?pagename=TN_homepage

Ernesto de Armas of Piperton, TN, originally of Havana, Cuba, passed away on Wednesday, May 5th, 2021 at the age of 69. Ernesto was born July 18, 1951, in Havana, Cuba, eventually becoming the 3rd youngest in a large family of deep Catholic... View Obituary & Service Information