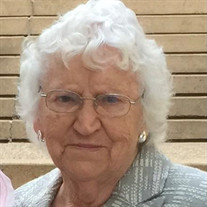 Emogene Fuller passed away peacefully on Friday, January 14, 2022, surrounded by her loving family, at the age of 93. She was born, along with her twin sister Imogene, on December 1, 1928, in Tipton County, Tennessee. She was the daughter of Marvin and Mattie Joyner, and the younger sister of Bessie, M.C., Woodrow, Charlie, and Pete. The family moved to Memphis when she was 6, where she attended school and graduated from Humes High School. She worked as a bookkeeper until marrying Earl Fuller on May 20, 1961. She kept up her bookkeeping ways until her passing and would reconcile her checking account each month to the penny. A few of her favorite activities were cooking, playing cards, camping, traveling, watching basketball, and water skiing. She was a lifelong resident of the greater Memphis area that included a number of years at Sardis Lake. She was faithful, loving, and strong. Emogene and Earl were married almost 60 years until his passing on April 29, 2021. She is survived by her fraternal twin Imogene Joyner, her children: Martha Fuller (Rick Jennings), Jeffrey Fuller (Anita) and Robyn Maxwell (Jack), and her five grandchildren: Abigail Fuller, Trevor Maxwell, Emily Fuller, Jillian Maxwell, and Donnie Fuller. If you are unable to attend the services, and wish to do something to honor Emogene Fuller, the family suggests cooking a favorite meal for someone you love. And for those sending flowers, yellow was always her favorite. The service celebrating the life of Emogene will be held at 2:00 PM on Monday, January 24, 2022, at Memorial Park Funeral Home & Cemetery, Memphis, TN. Visitation to be held beginning at 1:00 PM prior to the funeral service and graveside services will begin at approximately 3 PM. To view the memorial tribute video. Click the link below. https://www.tributeslides.com/tributes/show/HSJ8NS23QHBBJ474

Emogene Fuller passed away peacefully on Friday, January 14, 2022, surrounded by her loving family, at the age of 93. She was born, along with her twin sister Imogene, on December 1, 1928, in Tipton County, Tennessee. She was the daughter... View Obituary & Service Information

The family of Emogene Fuller created this Life Tributes page to make it easy to share your memories.