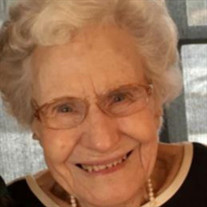 Elizabeth Allene Rackley Prude was born in Troy, MS, on August 14, 1923. She lived a full, exceptionally healthy life and passed away after a very short illness in Memphis, TN, on December 14, 2020. Allene and her twin sister, Maxine, were born at home on a hot August day as the first-born children to John Ervin and Opal Dallas Rackley in the cotton fields on the outskirts of Pontotoc, MS. Their father ran to get the doctor for help and nobody knew young Opal was giving birth to twins until after Allene was born. She liked to tout that she was Maxine’s older sister, having entered the world a full thirty minutes before her. Had it not been for their grandmothers building a fire in the house on that hot summer day to help keep the babies warm, they would not have survived. Along with their two younger sisters, the twins grew up working on the family farm, rising early to milk cows, gather eggs, and help their father pick cotton in the fields. They were well known in their town and although the attention made them shy, they were loved by everyone. Allene and Maxine graduated from Pontotoc High School in 1941 and moved to the big city of Memphis at the age of seventeen to attend business school. The twins found jobs, got involved at Temple Baptist Church, and were inseparable until Allene married the love of her life, William Andrew Prude, “W. A.,” in 1952. Her strongest spiritual gift was service, and she felt most satisfied while serving others. Whether driving carpool, volunteering at church and school, or being the mom who drove all the other kids everywhere, she was always available to help others. She taught her children to trust God in all circumstances and to treat others the way you wanted to be treated. She always seemed to find the good in others. Her answer to any problem was to pray about it. She was thrilled to be a homemaker, and what a fun home she made! She knew how to add just the right touches to make holidays and birthdays seem magical. She was the kind of mother, grandmother, and even great grandmother who would get on the floor and play with children. She became everyone’s “MawMaw” whether they were related to her or not. Allene and W. A. were a team for forty-eight years. Even though a big part of her heart died when he passed away in 2000, she remained strong in spirit and continued giving sacrificially of herself, especially to her family. She lived alone in their dream home they had built together in 1978 until January 2020 when she and her twin sister moved in with each other to Kirby Pines. The sisters were finally reunited after sixty-eight years of living apart! There was no more need for their three hour phone calls, but they have stayed up until early morning talking “because we are the last ones living who remember these things.” Besides her parents and husband, she is predeceased by her sisters, Eva Rackley Rogers Nash and Kathryn Rackley O’Brien. She is survived by her twin sister and soulmate, Maxine Rackley Toldi, and her two children, Bill Prude and Penny Layne Prude Brand as well as her son-in-law, Eric Brand, whom she loved like a son. She is also survived by her six grandchildren, Dustin Prude, Whitney Prude Thompson (Jordan), Joshua Brand (Kerri), Josiah Brand (Keli), Joseph Brand, and Mary Brand. She counted it a huge blessing from God to live to enjoy eight great grandchildren, ages seven years through eight months — Elisha Brand, Lydia Brand, Jeremiah Brand, Ezra Brand, Corinne Thompson, Ruthie Brand, Micah Brand, and Meryl Thompson, listed in birth order. She also loved and was dearly loved by many nieces and nephews and their children. A family friend said about her, “I never saw your mother when she wasn’t happy, and I wonder if she slept with that great smile on her face.” There is no doubt her smile is bigger than ever as she has met her Savior face-to-face and has been reunited with her husband! Visitation will be Monday, December 21, at 10am followed by a service at 12pm at her home church of Graceview Presbyterian Church, 7660 Swinnea Road, Southaven, MS 38671 Graveside will be at 2pm for family only at Memorial Park Cemetery, 5668 Poplar Avenue, Memphis, TN 38119

Elizabeth Allene Rackley Prude was born in Troy, MS, on August 14, 1923. She lived a full, exceptionally healthy life and passed away after a very short illness in Memphis, TN, on December 14, 2020. Allene and her twin sister, Maxine, were... View Obituary & Service Information

The family of Elizabeth Allene Rackley Prude created this Life Tributes page to make it easy to share your memories.

Send flowers to the Prude family.