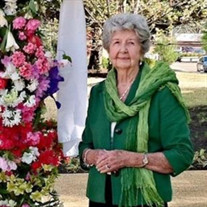 Elizabeth Hart Stout Green, known as Betty to her many friends and Gigi to her family, passed away on February 8, 2021, at age 94. She was born in Memphis on May 13, 1926, to Allie May Stotz Stout and Edward Cole Stout. Betty’s childhood was filled with many friendships which lasted a lifetime. Her father was an accomplished horseman, and Betty developed an early love of riding. She and her friends would ride all over town, and were known to ride across Galloway Golf Course to the disdain of the neighbors. Betty graduated from Central High school in Memphis, and attended Christian College in Columbia, Missouri. She came home and went to Southwestern at Memphis, where she met Clifford Green, Jr., who she instantly set her eyes on. They married and their happy marriage produced three children. She was heartbroken when she lost Cliff in 1981. In her 94 years, Betty was active in Germantown Presbyterian Church and Women of the Church. Her chocolate sheet cake was a staple at every church Family Night Supper. She loved gardening, and was a member of the Suburban Garden Club. An avid tennis player, she was a member of the Germantown Women’s Tennis Club which successfully lobbied to replace the old courts near the Horse Show grounds. She was a member of the Germantown Charity Horse Show Association and attended the show every year, usually right after returning from the family’s yearly trip to Myrtle Beach. She loved being at the beach, any beach, and spent many happy days in the Destin area with the rest of the tennis club. Betty led a very active life. In addition to tennis and golf, which she played regularly, she used to water ski, snow ski and bike. She also traveled quite a bit — Cuba (when she was 20-ish), Spain, England, Scotland, France, Alaska and all over the rest of our country. She rode in a bike tour in the Green Hills of Vermont, and she rode a horse in the Grand Junction Field Trials when she was in her 40s. She was a prolific and talented knitter, making sweaters, scarves, hats, baby blankets and afghans. She also took up trapshooting so she could enjoy the sport with her husband. She was involved in the Germantown Women’s Club and was one of the founders of the Germantown Community Theatre. Betty leaves three children - David Green (Dianne), Susan Green Jones and Clifford E. Green (Tricia). She leaves eight grandchildren who loved their Gigi - Lara Watson (Austin), Christopher Green (Shelby), Jonathan Green (Emily), Clifford Jones (Katie), Dr. Elizabeth Jones, Erin Ramirez (Frank), Kelsey Couvion (Kyle) and Colin Green (Maggie). She also leaves behind twelve great-grandchildren - Carly, Avery and Liza Blake Watson, Porter and Augusta Green, Malyn Green; Ryan, Ainsley and Harrison Ramirez; Owen and Addison Couvion and Caroline Green. She dearly loved her family and friends, and although she will be dearly missed by all, we rejoice that she has been reunited with Clifford and both are in the arms of their Lord and Savior.

Elizabeth Hart Stout Green, known as Betty to her many friends and Gigi to her family, passed away on February 8, 2021, at age 94. She was born in Memphis on May 13, 1926, to Allie May Stotz Stout and Edward Cole Stout. Betty&#8217;s childhood... View Obituary & Service Information

The family of Elizabeth Stout Green created this Life Tributes page to make it easy to share your memories.

Elizabeth Hart Stout Green, known as Betty to her many friends...

Send flowers to the Green family.