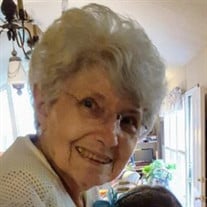 On June 10, 2020 I, Dona Patricia Kraemer Maybry, died quietly and at peace, with my much loved family by my side as well as one of our cats stretched out against me. I am on my last adventure, returning home to join my Bill, and to meet my... View Obituary & Service Information

The family of Dona Patricia Kraemer Maybry created this Life Tributes page to make it easy to share your memories.

Send flowers to the Maybry family.