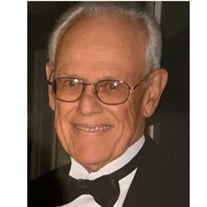 Beloved patriarch, Don Francis Stark, passed away on April 14, 2022, in Memphis, TN at the age of 91. Born September 23, 1930, to Betty and Ray Stark in Wauwatosa, WI, Don attended Marquette University Jesuit High School. He graduated Magna Cum Laude from the University of Notre Dame in 1952 and earned his J.D. from Marquette University Law School in 1955 ranked second in his class. Don was a CPA and the partner-in-charge of the tax practice of the Memphis office of Deloitte. He retired after almost 40 years of service, then continued working for many years as a sole practitioner. Don loved to say that he was a CPA that never conducted an audit and a lawyer who never tried a case. Don married the love of his life, Marie Homar, on September 28, 1957, in Milwaukee and moved to Memphis in 1963 with their three children. They had two more children in Memphis and raised their family in Whitehaven where Don was active at St. Paul Catholic Church and the Boy Scouts. Later, Don & Marie made homes in Midtown and East Memphis where they enjoyed a rich social life. Don’s affiliations included the Rotary Club of Memphis, the Notre Dame Club of Memphis, and numerous professional organizations. He particularly enjoyed his time at the University Club and the Racquet Club. Don played tennis regularly for as long as his body allowed and was an avid fan. His keen intellect served him well at the bridge table and the chess board, and his extensive travels included many national and international adventures. His favorite city was Paris and favorite trip was to Normandy, France where he visited multiple times. Family time at Pickwick was special to him. Don loved history, was an avid reader, and could converse on countless historical topics. Don was a faithful, devoted family man of gentle love and kindness. Loved by all, he leaves behind this legacy in the hearts of his children, grandchildren, great grandchildren – and many of those who knew him. Don is survived by his wife, Marie, his sister Ferol Breymann, his children, Paul (Cindy), Susan, Eric, Joel (Joey) and Pete (Jackie), his grandchildren Michael (Stephanie), Julie Upchurch (Marc), Lauren Hogan (Sean), Joel Jr. (Chanler), Matthew, Zach, Kayla Wallace (George), Ben, Nicole, Nick, and Jill, plus eight great grandchildren. The family requests that in lieu of flowers, please send donations in his memory to St. Paul Catholic School or St. Jude Children’s Research Hospital. Services will take place at St. Paul the Apostle Catholic Church, 1425 E. Shelby Drive, Memphis, TN, on Friday, April 22, 2022. Visitation begins at 12:30 pm, followed by a Funeral Mass at 2 pm.

The family of Don Francis Stark created this Life Tributes page to make it easy to share your memories.

Send flowers to the Stark family.