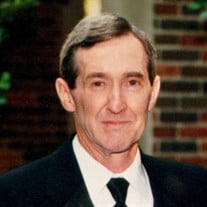 Denny was 78 years old when he passed away of complications of Alzheimer’s Disease. He was a Vietnam Army Veteran, earning the Bronze Star and the Army Commendation Medal, and later served in the Tennessee State Guard. He was a brewing chemist at Schlitz, Stroh’s and Coors Brewing Company, before retiring at age 61 to enjoy travel with his wife, family and friends. Denny was a member of Central Church in Collierville and a member of their Ambassadors Senior Adult Class. He was predeceased by his parents, Charles and Susan Baker. He is likely dancing in Heaven (probably the Bop) to be reunited with them and celebrating the season, as they passed away in a car accident at Christmas. Denny leaves behind a loving family who will miss him greatly but know he is healed and whole in Heaven: His wife of 51 years, Martha Agneta Baker; his three children, Charles R Baker (Tammy), Bethany Baker Newman (Josh), and Matthew R Baker (Yuka); the best grandchildren anyone could ask for: Austin, Ava, Paige, Alex, Nene and Go. He was loved by his younger brother Timothy (Mimi) and younger sister Judy, along with nieces and nephews. We all know we will see him again because of our faith in Christ. One of his favorite verses was Romans 8:38-39 : "For I’m convinced that neither death nor life, neither angels nor demons, neither the present nor the future, nor any powers, neither height nor depth, nor anything else in all creation, will be able to separate us from the love of God that is in Christ Jesus our Lord." An outdoor graveside service will be Monday, December 28th at Memorial Park Cemetery for family and close friends only. The family requests any memorials be sent to the Alzheimer’s Association of Memphis and Page Robbins Adult Day Center of Collierville.

Denny was 78 years old when he passed away of complications of Alzheimer&#8217;s Disease. He was a Vietnam Army Veteran, earning the Bronze Star and the Army Commendation Medal, and later served in the Tennessee State Guard. He was a brewing... View Obituary & Service Information

The family of Dennis Charles Baker created this Life Tributes page to make it easy to share your memories.

Denny was 78 years old when he passed away of complications of...

Send flowers to the Baker family.