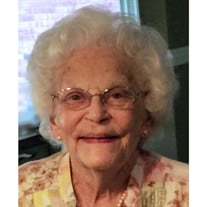 Dora Deane (DeDe) McGee Fulton Scott passed away in her home at Kirby Pines Community on June 21, 2021 at the age of 94. She was born on May 25, 1927 in Louisville, MS to the late Joseph Walter Triplett and Dora Deane Richardson Triplett. DeDe graduated Valedictorian from Louisville High School in May 1945 and from the University of Mississippi in January 1949. She never made below an A in any subject throughout all of her years in school. She married Dr. John L. McGee, Jr. on August 6, 1947 and together they raised four children in Memphis, TN. They were happily married for 42 years until his death in 1989. A few years later, DeDe relocated back to her hometown when she married Dr. Nolen Fulton in August 1991. They shared many wonderful traveling adventures together until his death in 2006. DeDe was married to Dr. Joseph Scott of the Kirby Pines Community from June 2008 until his death in 2016. They enjoyed writing poetry together and cherished the countless friendships they made during their golden years there. DeDe was a devoted wife, mother, grandmother, and friend. She was also an avid reader her entire life and enjoyed keeping a daily journal for over 80 years. In addition to these, she also enjoyed a variety of other hobbies throughout her life - collecting cookbooks & recipes, working in the yard, sewing & cross stitch, and playing on her iPad. According to her family and friends DeDe was one of the kindest, sweetest, dearest, and most gracious people you could ever meet. She had the unique ability of never forgetting a name. She spent her life going out of her way to make people feel loved and special. As a result of her generous spirit, pleasant personality, and contagious smile, she was loved by many. DeDe led, as she always said, a very blessed life! DeDe was preceded in death by her parents, her three husbands, and her daughter Jo Jackson & son-in-law Ricky Jackson. Her beautiful life will forever be cherished in the lives of those she leaves behind - her daughters Stephanie McVay (Billy) and Linda McGee, her son Michael McGee (Terry), her grandson John Michael McGee, and her stepchildren Lann Fulton, Carolyn Newhouse, Mike Scott, David Scott, Alan Scott, and John Scott. The family will receive relatives and friends on Thursday, June 24 from 12:30 pm until the time of the funeral service at 2:30 pm at Memorial Park Funeral Home and Cemetery, 5668 Poplar Avenue in Memphis. The committal service will immediately follow Memorials will be graciously accepted by; Colonial Park United Methodist Church (https://colonialpark.org/) or Kirby Pines Foundation (https://kirbypines.com/about-us/donate-now/). Click the link below to view the tribute slideshow: https://www.tributeslides.com/tributes/show/HPKYPZTHWBJXCZJL

Dora Deane (DeDe) McGee Fulton Scott passed away in her home at Kirby Pines Community on June 21, 2021 at the age of 94. She was born on May 25, 1927 in Louisville, MS to the late Joseph Walter Triplett and Dora Deane Richardson Triplett. DeDe... View Obituary & Service Information