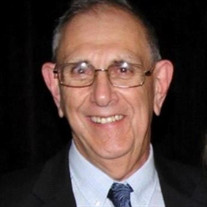 Clyde “Coach” Burnett Israel, 75, passed away June 17, 2021 peacefully at his home in Bartlett, TN surrounded by his loving family. Clyde was born in Birmingham, AL on April 6, 1946 to Louise and Clyde Kilgore. Early in life he was cared for by his doting aunt Archieva and Uncle Henry Kilgore of Gibson Hill, Alabama. Eventually he moved to Jacksonville, FL with his mother and stepfather William “Bill” Israel. Clyde attended Paxon Junior and Senior High School. Clyde’s bond with his fellow Eagles is unbreakable. The gentle giant standing at 6’6 and 300 lbs was a daunting powerhouse of athletic ability lettering in football and basketball. After receiving scholarship offers from Florida State University, University of Florida, and Memphis State University; Clyde followed his dreams of playing college football to Memphis to play for the Memphis State University Tigers. It is there that he met his beloved wife, Charlotte. A neck injury occurring in a practice in 1967 ended his college football career. Clyde and Charlotte married in 1968 in a beautiful ceremony in Germantown, TN. After a brief move to Jacksonville, FL they returned to Memphis, TN. Motivated by his love for the game and sports in general, Clyde accepted his first coaching position and forever after became known as “Coach”. He helped start the football program at Rossville Academy in Rossville, TN in 1973. At this pivotal moment the realization that his love for kids far outweighed his love for sports. In 1975 following the birth of his son Jason, Coach’s faith led him to accept a position with the Catholic Diocese of Memphis at Bishop Byrne High School. He called Byrne home for the next 13 years during which he also welcomed the birth of his daughter, Jennifer in 1978. In 1988 he transferred to the newly opened St. Benedict at Auburndale where he remained for 4 years. In 1992 he took a break from the Catholic Diocese and headed down to Southern Baptist Educational Center in Southaven, MS where he spent 2 years as a coach and a disciplinarian. He returned to the Catholic Diocese of Memphis in 1994 filling many roles at Memphis Catholic High School in Memphis, TN. In 2011 he was called back to Bishop Byrne High School to fulfill the role as principal. He poured his heart and soul into a school that looked much different than the one he left in 1988. Enrollment improved, spirit of the red knight began to return, and the students were thriving. His return was brief as CDOM made the decision to close the doors to Bishop Byrne High School in the spring of 2013. This decision ended his relationship with CDOM. Coach and his wife headed to Hollywood, FL where he accepted the position of Dean of Discipline at Chaminade Madonna College Preparatory School. After 2 years he chose to retire to Jacksonville, FL. His love for his grandchildren summoned them back to Memphis in 2016. He formed lifelong relationships with countless parents, faculty, staff, and his “kids” at each school he stepped into. Coach’s unwavering faith had a great influence on the values he instilled in his family and how he lived his life. In recent years he formed a new relationship with New Hope Christian Church in Bartlett, TN. There, he met and loved many new friends. Coach loved his family with a fierceness that is immeasurable. He was a devoted husband to his wife, Charlotte for 52 years and did not let a day pass that he didn’t show the great love he had for her. The greatest pride and joy of his life were his son and best friend Jason (Elizabeth) Israel of Lewisburg, MS and his baby girl Jennifer (Trey) Edge of Bartlett, TN. Affectionately known as Poppy to his 10 adoring grandchildren Keaton Israel, Halei Edge, Hayden Edge, Kaitlyn Edge, Hannah Edge, T.J. Edge, Gavin Edge, Parker Israel, Katelyn Israel, and Hadlianne Edge. He made sure to spend quality time with each of them sharing his love of history by taking them to different battlegrounds and museums whenever he had the chance. He will be remembered for his teasing jokes, his wildly entertaining stories, his unfailing work ethic, his generous smile, and his love for all of “his kids”. To celebrate his life, visitation will begin at 9:00 a.m. on Tuesday June 22, 2021 at New Hope Christian Church 3300 Kirby Whitten Rd Bartlett, TN 38134 immediately followed by the service starting at 11:00 a.m. Graveside service will follow at Memorial Park Cemetery 5668 Poplar Ave Memphis, TN 38119. Reception to follow at New Hope Christian Church. In lieu of flowers, the family requests donations be made to your favorite local nonprofit school in his name.

The family of Clyde "Coach" Burnett Israel created this Life Tributes page to make it easy to share your memories.