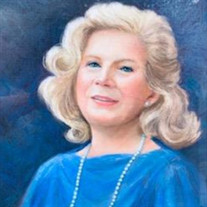 Carrie Barnes Ellis, 88, died peacefully on May 29, 2021. Carrie was born on July 14, 1932 in Memphis, TN to William Elias Barnes, Jr., and Loise Brown Barnes. She was preceded in death by her parents, kind sister, Lucretia Barnes Sanders, and her beloved children, son William (Billy) Barnes Ellis, daughter Janet Lynne Ellis, and niece Julia Sanders Hester. She is survived by her son Thomas (Tom) Sherrill Ellis of Tampa, FL and daughters Cynthia (Cindy) Ellis Dunn (Bill) of South Bend, IN and Susan Ellis Clifton (Duane), her three grandchildren, Ellis Alan White (Courtney), Elizabeth (Danielle) Clifton Eisenman (Nate), and Duane Browning Clifton, all of Memphis, TN and four great-grandchildren, Isobelle, Elana, Garrett, and Nathan. Carrie attended The Hutchison School, Fairview Junior High School and was a member of St. Mary’s Episcopal Cathedral; then, the Church of the Holy Communion. Throughout her life, Carrie was loved, and to many, a very special friend. She was an awesome storyteller and jokester. She had a keen sensibility toward those in the midst of a crisis or anyone in need of a friend. She was known to many as Mom, Aunt Carrie or NanChiChi. Carrie was an ardent, dutiful employee who began her career at William E. Barnes Lighting Fixtures, Inc. There she devoted time to designing light fixtures, participating in retail sales, ordering, shipping, and receiving parts. she also developed a mail order catalog of fixtures for national distribution; she drew beautifully. She became Shop Foreman and General Office Manager before moving on to her career as a Salon Receptionist and Manager; working for Shelia and David Zaricor (Don Pedro/Narcissus), Fran Tice (Beau Monde, Inc.), and Phillip and David Gould (Gould’s Salon•Spa). Later in life, she enjoyed working part-time for Drs. H.D. & David Terry (Memphis, TN), Traci M. Levy (South Bend, IN), and Rocky Creek Village (Tampa, FL). Carrie enjoyed being a volunteer for the Memphis Suicide Crisis Prevention Center, which to her family and friends exemplified her spiritual gifts of hospitality, helping and service to others. The family expresses their appreciation to The Heritage of Irene Woods and all of Carrie’s friends, especially Polly Garner, for their love, support, and fellowship. She would want you all to know she’s with her LORD and King, our savior, Jesus Christ. At Carrie’s request, a dual memorial service and reception celebrating the lives of Carrie and her daughter Janet, will be held on Monday, June 28, 2021 at 2:30 pm at Memorial Park Funeral Home. A family only graveside service will be held prior to the memorial service. Click the link below to view the webcasted service: http://webcast.funeralvue.com/events/viewer/56325/hash:ED5E40F0112BD909 Memorial Park has charge. In lieu of flowers, the family requests that any memorial donations be made to the Alzheimer’s Association, Children’s Cancer Center, St. Jude Children’s

Carrie Barnes Ellis, 88, died peacefully on May 29, 2021. Carrie was born on July 14, 1932 in Memphis, TN to William Elias Barnes, Jr., and Loise Brown Barnes. She was preceded in death by her parents, kind sister, Lucretia Barnes Sanders, and... View Obituary & Service Information

The family of Carrie Barnes Ellis created this Life Tributes page to make it easy to share your memories.

Send flowers to the Ellis family.