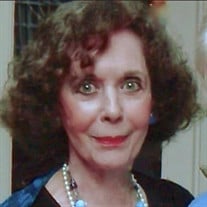 If one had ever met my mother, they'd know as well as I, that Barbara Blair Kleitsch never met a stranger. Friends of her’s never fail to say the very same thing to me when we meet, “We just love your mother!” I am sad to announce that on March 24, 2020 in the wee hours of the morning, Miss Barbara passed peacefully to be with the Lord at the Methodist Hospice Residence of Memphis where she had been in care for several months. Born Barbara June Blair in Kennett, Missouri, she was the only child of grocer Owen Blair and his wife Mae Crain Blair. Barbara’s early life was lived there, in and around the Midsouth region, including Little Rock & Fort Smith, AR and Paducah, KY where she graduated from Augusta Tillman High School and met her future husband, Jack Kleitsch, a US Coastguard officer stationed on the Kentucky River during WWII. They married shortly before the war’s end, and proceeded to live in a number of cities—Champaign, IL where their first son, Blair, was born in 1946, Indianapolis, IN and Ashland, KY. They arrived in Memphis in 1959 and became Memphians for life, they were so taken with the city. Their second child, Lee, was born in 1962. Barbara and Jack were married for 54 years until Jack’s death in 1999. She was a wonderful and loving mother and liked to say her “sons were her greatest joy on earth”. In the years that followed Jack’s death, Barbara’s family was extended to further include that of Memphis attorney and former Tennessee circuit court judge, Thomas B Avery, a widower who became her loving and devoted companion of 16 years until his death in August of last year. She is affectionately known as “Lala” by his grandchildren, like a grandmother to them and they like grandchildren to her. Having worked as a fashion model in other cities, arriving in Memphis in 1959, Barbara quickly became one of the busiest models in town, an icon of the Memphis fashion world and a fixture of print, runway and trunk shows until her retirement in 1990. She showed clothes for the finest stores in the city, Helen of Memphis, Laclede, the Trousseau Shop, Julius Lewis, Minor Frances, Lily Ruben, Gus Mayer, Wolf Brothers and Goldsmith’s, most of which are no longer, and shared event stages with the likes of entertainers Jerry Lee Lewis and Ike & Tina Turner. In the mid 1970s, Barbara was one of six women having the boldness to found PMA (The Professional Models Association) of Memphis, establishing the first standardized rates and booking policies for the city’s modeling industry. Because of this career, she was widely known and recognized wherever she went. Creative in all things, Barbara was also an accomplished artist and professional watercolorist. Her interest in art came early, encouraged by her father who was her first teacher, but it was not until the 1970’s that her painting really began to flourish. She studied art with such local greats as Paul Penczner, Fred Rawlinson and Steve Yee, and attended The Memphis College of Art (formerly known as the Art Academy of Memphis). She was a regular entrant in juried competitions across the region and the country and received numerous awards for her work over the years. She was a member of the Tennessee Watercolor Society and others. Many of Barbara’s paintings are owned by individuals and hang in private collections across the city and beyond. She was most well known for her dramatically stark architectural renderings, aged houses and sculptural, decrepit structures portrayed in realistic style on a pure white sky. Having been provided a menagerie of pets by her father Owen as a child, including but not limited to dogs, cats, geese, rabbits, a pig, a pony and even a monkey for a short time, Barbara was a great lover of animals of all kinds—but especially dogs. She can be seen in most photos holding a dog in her lap…even when wearing a suit, silk, pearls or fur. It did not matter. She shared that love with her family, who’ve never known life without at least one animal in their homes. A resident of Memphis for six decades, Barbara was a true southern lady who lived a life hallmarked by art and style. Soft-spoken but hardly shy, she never passed another soul without offering a smile, a nod and a southern “Hi, how’re you?” Also a very soulful person, she had great generosity of spirit, kindness always for those she encountered and a listening and a compassionate ear for those with troubles. She was a devoted Christian and a long time member of Independent Presbyterian Church, where she attended regularly and made many friends whom she adored. She was blessed with an inherent gift for comforting others and always ready to join in heartfelt chat and a prayer with anyone she might encounter—anywhere, anytime. Miss Barbara was a true original and will be greatly missed by her family, many friends and acquaintances who knew her. She is survived by her son Lee Kleitsch formerly of Dallas, her cousins Byron and Virginia Crain of Germantown and her second family, Elizabeth Avery Ivey & Charlie Ivey of Memphis and their daughters Mallory and Olivia, and Ed and Angie Avery of Middleton, TN and their four children, Mary Agnes, Anna Jane, Savannah and Thomas. ~ “Say goodnight, Gracie” Given current national conditions and in consideration for the health and well-being of all, interment will be private and for family only. They would also request that in lieu of flowers, donations be made to The Memphis Humane Society, https://www.facebook.com/barbara.kleitsch.1/posts/104404984547988 and that no food brought to their residence. Thank you for your understanding during these extraordinary circumstances.

If one had ever met my mother, they'd know as well as I, that Barbara Blair Kleitsch never met a stranger. Friends of her&#8217;s never fail to say the very same thing to me when we meet, &#8220;We just love your mother!&#8221; I am sad to... View Obituary & Service Information

The family of Barbara Blair Kleitsch created this Life Tributes page to make it easy to share your memories.