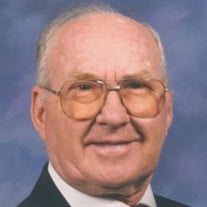 Arthur Dennis Peeples, was born, July 15th, 1926, in Alva, Mississippi. He went to be with his Lord on Tuesday, November 16, 2021... at the age of 95. He passed away surrounded by his family. He is preceded in death by his parents and two brothers….and his loving wife, Patty Peeples. He is survived by One sister… Mary Edna Carder; Two daughters… Gayle Ennis (Joe) and Lane Steen; Five grandchildren: Heather Nyen (Bob), Holly Ennis (Dave Peters), Mark Ennis, Josie Steen and Will Steen. Four great-grandchildren…Avery and Emily Nyen, Evelyn and Ethan Ennis-Peters. As a young man, Dennis enlisted in the U.S. Navy in July, 1947, but was given an honorable, medical discharge in January, 1948. He then met and later married Patty Rue Carnell on December 17th, 1949. He had learned the trade of a meat butcher and went to work as one for A&P Grocery. Soon thereafter he became a Meat Market Manager, which he remained for many years. Using his butchering and management skills, he also purchased a Coleman’s Barbeque franchise. Later in his career he worked in the meat markets for Seessel’s, Big-Star, and Ramon’s Meat Market…all in the Memphis area. He finally retired at age 90. In addition to providing a loving, happy and secure home life for his family, Dennis, had other notable passions that gave him meaning and pleasure in his life: As a Christian, his faith was who He really was. As a deacon at Merton Avenue Baptist Church for many years, he was a living example of being a humble servant. His insights, good judgment and sense of humor made him a friend to all who knew him. Plus, he was a wonderful ‘storyteller.’ Just to be around him very long was to laugh with him about his many experiences and observations about people and the world. He also enjoyed restoring and repairing cars and helping people find affordable transportation…often at little cost. In addition to various “fine-runnin’ cars”, as he liked to call them, he also owned a couple of horses and even a large “Harley”...yes… a motorcycle. He was cool. He was smart. He was funny. His mission was always to help others in need. Dennis was a good-hearted man who loved life and encouraged others to do the same. The family will receive friends from 1:00 p.m. - 2:00 p.m., Saturday, December 4, 2021. Service will begin at 2:00 p.m. In lieu of flowers, the family would like to honor his wishes by requesting that a donation be made to the University of Memphis (benefiting Josie and Will Steen). University of Memphis donation information: University of Memphis foundation. Mail to: Dept 238, U of M Foundation, PO Box 1000. Memphis, Tennessee. 38148-0001. Please put in the memo line: "In memory of Dennis Peeples" in the check memo line. By Phone call (901) 678-3953, or the alternate donation website link: supportum.memphis.edu/peeples To view Mr. Arthur Dennis Peeples service online, please click the link: http://webcast.funeralvue.com/events/viewer/64563/hash:12034710F487301E

Arthur Dennis Peeples, was born, July 15th, 1926, in Alva, Mississippi. He went to be with his Lord on Tuesday, November 16, 2021... at the age of 95. He passed away surrounded by his family. He is preceded in death by his parents and two brothers&#8230;.and... View Obituary & Service Information

The family of Arthur Dennis Peeples created this Life Tributes page to make it easy to share your memories.

Send flowers to the Peeples family.