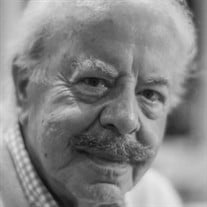 Our beloved father and grandfather, Aram Sarkis Hanissian died peacefully at his home on February 10, 2021 at the age of 91, surrounded by his family. He was born March 20,1929, to Sarkis and Helen Hanissian. His idyllic childhood was a peaceful one in historic Armenia, on his family’s olive plantation. Forcibly displaced to Lebanon at the age of ten (one of the final chapters of the genocide beset upon the Christians of Anatolia in the early twentieth century), he helped build a village in the ruins of Anjar, Lebanon, in the Bekaa Valley. Resilient, brilliant, and hard working, he earned scholarships to parochial schools, matriculated at Oxford University, and the American University of Beirut (AUB), where he was awarded his degree in Medicine. It was at AUB that he met Alice Terzian, a vivacious freshman who was his lifelong love. Marriage and a first child, Talynn, was followed by a move to the U.S. for a residency in pediatrics at the University of Chicago. The young family then moved to Memphis for Aram to enter a fellowship in allergy/immunology, followed by a fellowship in rheumatology. He joined the University of Tennessee faculty where he helped educate medical students and residents. He published extensively and wrote a textbook of pediatric rheumatology which predated the establishment of the subspecialty board by more than a decade. As part of the initial CF Club in the 1960’s, he established the first cystic fibrosis center in the 1970’s, serving as its medical director. He continued to care for cystic fibrosis patients in his private practice into the 1990’s. Despite his busy medical practice he spent quality time with his children, Talynn, Greg and Ara. He was a kind and loving father and a role model. His physician children remember his wise words and careful guidance in their careers. His son Greg joined his successful private practice in allergy and rheumatology in 1996, and they practiced together until his retirement in 2013. Aram was known for his warm, caring, loving attitude toward his patients, who were his extended family. Aram enjoyed working on his farm, and traveling the world with Alice. He spent winters in Naples, Florida where he had made many dear friends. Above all he was a loving father, grandfather and a devout Christian. He was preceded in death by his parents Sarkis and Helen, his wife Alice, siblings Arshalous, Hovanness, Hrant and their spouses, his sisters-in-law Pepron Handian and Sirvart Terzian. He is survived by his children Talynn (Artin), Gregory (Kelly) and Ara (Gina) Hanissian, his grandchildren Avniel, Chana, Yeshaya, Yaakov, Yonatan, Miriam and Raizel Adler, Andrew, Elena, and Lily Hanissian, Alise, Gregory, Ara James Hanissian and Armen Hanissian and four great grandchildren. Those who wish to honor his memory, may make a donation to a charity of the donor’s choice. The family intends to have a memorial service at a later date.

Our beloved father and grandfather, Aram Sarkis Hanissian died peacefully at his home on February 10, 2021 at the age of 91, surrounded by his family. He was born March 20,1929, to Sarkis and Helen Hanissian. His idyllic childhood was a peaceful... View Obituary & Service Information

The family of Aram Sarkis Hanissian MD created this Life Tributes page to make it easy to share your memories.

Send flowers to the Hanissian family.